Google’s Pixel phone: Not much new, but still a standout 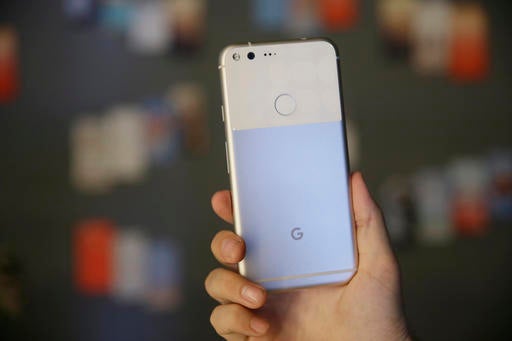 The new Google Pixel phone is displayed following a product event, Tuesday, Oct. 4, 2016, in San Francisco. Google launched an aggressive challenge to Apple and Samsung introducing its own new line of smartphones called Pixel, which are designed to showcase a digital helper the company calls “Google Assistant.” The new phones represent a big, new push by Google to sell its own consumer devices, instead of largely just supplying software for other manufacturers. AP

NEW YORK — Google’s ambitious new smartphone, the Pixel, doesn’t offer a lot that’s new. Yet it’s still one of the best out there.

Google achieves that by pulling together the best features from Apple, Samsung and other phones and offering them at prices comparable to iPhones — starting at about $650 for the regular, 5-inch model and $770 for the 5.5-inch “XL” edition. Both versions go on sale Thursday through Verizon, Best Buy and Google’s online store.

I tested the Pixel XL model; the regular version has identical features except for its smaller display and battery — still enough for 13 hours of internet use, according to Google. With either, you get an excellent camera and a strong voice assistant that promises to get smarter.

The Pixel isn’t quite an iPhone replacement, as Google wants you to believe ; hardware is just part of what makes an iPhone an iPhone. But it might serve up a strong challenge to Samsung, especially as people look for alternatives to the fire-prone Galaxy Note 7 .

The Pixel’s image quality is superb — though purists may quibble. Colors in some shots look too strong and clean to me, thanks to software processing intended to reduce distortion and improve detail (something all phones do to some extent).

But automation pays off in another way: The Pixel will automatically combine successive shots into an animated “GIF” file, offering a fun way to share a toddler’s steps or a dog jumping. For video, the Pixel’s stabilization technology compensates for shaky hands and other movement, matching what the iPhone and Galaxy phones can do.

The Pixel borrows a quick-launch feature from Samsung phones. Just double tap the power button to start the camera, even if the phone is locked. To switch between the front and rear cameras, just double twist the phone like a door knob — a feature Motorola, which Google once owned, has long offered.

Low-light images taken with the Pixel in three museums aren’t as crisp as those from the iPhone 7 and Samsung’s Galaxy S7 (which has the same camera as the Note 7). But differences are small, and the Pixel does better than typical smartphones. Where the Pixel falls short is in extreme close-ups, such as shooting a flower petal or a small bug; photos were typically blurry. The Pixel’s selfie camera is also inferior, with no front flash or control over the focus. But it’s fine in good light and at typical distances for selfies.

Google’s voice assistant, simply known as Google Assistant, will seem familiar to those who have used Apple’s Siri or Amazon’s Alexa features.

Google’s version goes further in offering daily updates such as weather and news, though plenty of apps already offer similar capabilities through notifications. Google is also better at remembering preferences — say, if you prefer temperatures in Celsius — and at integrating with its own services, such as Translate and Photos.

But Assistant doesn’t yet sync with a similar Assistant in Google’s Allo chat app and upcoming Home speaker. And it isn’t as proactive as the Google Now assistant already built into Android phones. Google Now, for instance, will look through your Gmail account for flight reservations and remind you when to head to the airport. It will analyze your daily commute and warn of delays. Assistant waits for you to ask.

Assistant holds up well compared with Siri and Alexa, but for more, swipe from left to right to get the old Google Now back. Google says Assistant will eventually get the Google Now functionality.

If you need help, you can reach Google’s customer support and enable screen sharing reminiscent of Amazon’s Mayday help feature. And the Pixel will work with Google’s upcoming Daydream View virtual-reality headset, much as Samsung phones have Samsung’s Gear VR.

Long-pressing an app icon brings up a menu of shortcuts, such as getting directions to home or launching the selfie camera. It’s similar to the iPhone’s 3D Touch. The Pixel also offers “Night Light,” a feature that tints your screen amber by filtering out blue light that might keep you up at night. Apple calls it Night Shift.

Pixel owners get unlimited storage of photos at original resolution, though that’s a little like offering Google search for free. Google Photos already offers unlimited storage at up to 16 megapixels; the Pixel’s camera is 12 megapixels. The free offer will make a difference for those who take video in ultra-sharp “4k” resolution, but the default setting is lower, at 1080p, which is already free at Google Photos.

The Pixel will be OK if you spray it with water, but don’t drop it in the pool. You also can’t expand its storage with a memory card, as you can with the S7 and Note 7 — though for $100 more, the Pixel’s 32 gigabytes of storage quadruples to 128 GB, and the free online storage should take care of your photos and videos. The battery isn’t removable, though that’s true for most phones these days.

Those looking for a Note 7 replacement will find the Pixel missing a stylus. If you’re an iPhone user, you’ll have to brace yourself for the switch to Android, which would entail buying new apps and learning new ways to navigate.

Google tries to make it easy to switch. The phone comes with a transfer cable, and the set-up process walks you through transferring photos, music and video, as long as it’s not encrypted (so scratch iTunes video). But apps won’t switch over from iPhones; you need to buy them again. TVJ