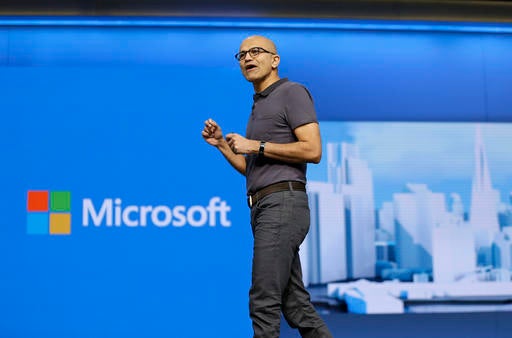 SAN FRANCISCO — Microsoft’s focus on business software and online services paid off with a surprisingly high profit in its latest quarter, putting its stock on a trajectory toward its all-time high.

The fiscal first-quarter results released Thursday provided further validation for the strategy that Microsoft CEO Satya Nadella has been pursuing since he took over the reins 2 1/2 years ago.

Investors were so impressed with Microsoft’s progress in the quarter that the company’s stock surged 6 percent to $60.68 in extended trading after the report came out. If the shares trade similarly during Friday’s regular trading session, they will surpass their previous split-adjusted high of $59.97 reached in December 1999 near the height of the dot-com boom and just before co-founder Bill Gates turned his CEO job over to his longtime friend, Steve Ballmer.

Under Ballmer’s leadership, Microsoft Corp. didn’t react quickly enough to the rise of Google’s now-dominant search engine and digital advertising network. It also underestimated the impact that Apple’s 2007 introduction of the iPhone would have on the personal computer market.

When Nadella succeeded Ballmer, Microsoft’s stock was trading below $37.

With sales of PCs running Microsoft’s Windows operating system falling, Nadella has been pouring money and resources into remote data centers that deliver the company’s services online to smartphones, tablets and other devices.

The approach, often called “cloud computing,” has been steadily growing, as it did again in the three-month period ending in September. The services are increasingly being embraced by both big and small companies, as well as government agencies. That helped lift revenue in the operating segment that includes commercial cloud services and online subscriptions by 6 percent from the same time last year to $6.7 billion.

Microsoft’s commercial cloud services are now on pace to generate about $13 billion in annual revenue and should reach the company’s goal of hitting $20 billion during the fiscal year ending in June 2018, Nadella told analysts in a conference call.

Just as encouraging, the cloud computing shift doesn’t seem to be damaging Microsoft’s sales of software maintained on the premises of offices. Those factors offset a 2 percent revenue decline in Microsoft’s largest operating segment, known as “more personal computing,’ that largely stemmed from the company’s retreat from making phones.

Overall, Microsoft’s fiscal-first quarter revenue totaled $20.5 billion, virtually unchanged from the previous year. If not for the deferred recognition for some Windows sales, Microsoft said its revenue would have been $22.3 billion, a 5 percent increase from last year and $600 million above the average estimates among analysts surveyed by FactSet.

Microsoft earned $4.7 billion, or 60 cents per share, in the quarter, a 4 percent decrease from last year. If not for deferred Windows revenue and other accounting items unrelated to its ongoing business, Microsoft said it would have earned 76 cents per share, topping analyst forecasts of 68 cents per share, according to FactSet.

The Redmond, Washington, company is hoping to build on its recent momentum after it completes its $26 billion acquisition of professional networking service, LinkedIn. That deal is expected to close by the end of the year. TVJ