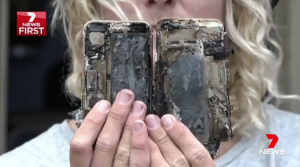 A surfing instructor from New South Wales, Australia, claimed that his iPhone 7 exploded inside his car on Thursday.

Mat Jones told Australia’s 7 News that he wrapped his gadget with a pair of jeans and left it inside his car. When he returned from his surfing lesson, he was stunned to witness his car burn in front of him. Sadly, he purchased the model just one week before.

Jones firmly asserted that his newly purchased phone prompted the dreadful explosion, although there was a possibility that his phone might have been “baked” inside his hot automobile. “As I looked into my car, you could not see inside the car like all the windows were just black,” Jones told the news site. “Ash was just coming from inside the pants which once you wrapped open the pants the phone was just melting inside of it.”

He recorded the molten remains of his phone, his car, and the pants he used to wrap it. Apple was reported to be investigating the incident.

This mishap came after several users reported that their Samsung Galaxy Note 7 prototypes unexpectedly caught fire weeks after they bought them. Overcharging, puncturing or overheating can cause a smartphone’s lithium-ion battery to explode.  Gianna Francesca Catolico