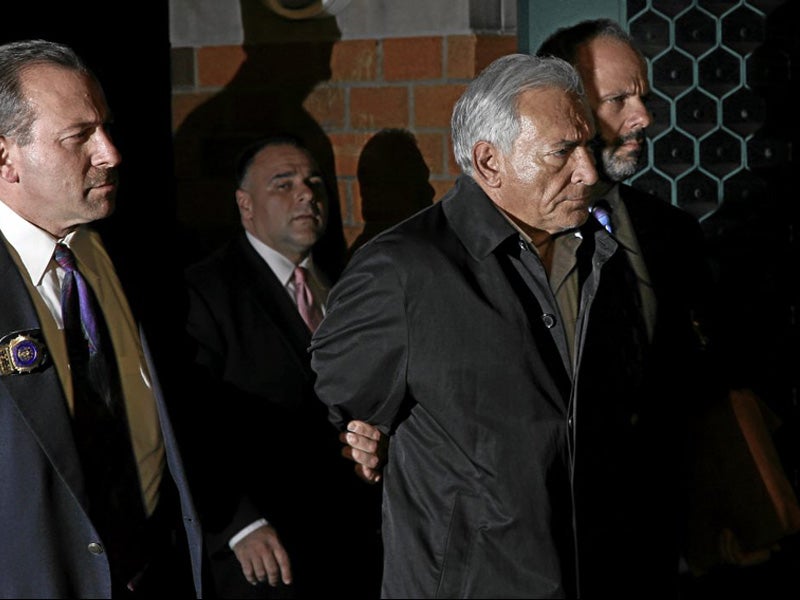 After his “perp walk” in New York, Strauss-Kahn will be sporting an ankle bracelet, another symbol of shame for the ex-finance titan. AP FILE PHOTO

LOS ANGELES – Previous high-profile wearers include Bernard Madoff and Martha Stewart; Dominique Strauss-Kahn would join a select disgraced band if forced to wear an electronic tag as part of a bail deal.

After his humiliating police “perp walk” in New York, the image of the International Monetary Fund (IMF) boss wearing an ankle bracelet would add another symbol of shame for the beleaguered global finance titan.

The Frenchman’s lawyers have pledged he would wear a tag — which can track his location with cutting-edge Global Positioning System (GPS) technology 24/7 — as a condition for being freed from New York’s notorious Rikers Island jail.

The monitoring device would be in addition to surrendering his passport, agreeing to stay in strictly-controlled location in New York and paying a reported $1 million dollar bail, according to reports.

“If Strauss-Kahn were to be placed on GPS monitoring it could be set to send signals giving his location minute by minute,” Marc Renzema, professor of criminal justice at Kutztown University in Pennsylvania, told AFP.

“If he were to leave the allowed area or to cut the bracelet from his ankle a signal would be immediately be sent to a monitoring center .. If a set number of signals were missed by the monitoring center, an alarm would also occur.”

Electronic tags, which these days can monitor a lot more than simply location, are used on thousands of defendants every year in the United States when house arrest is used as an alternative to formal custody.

As well as the tag itself — typically worn over socks for a man — the system involves installing a base station in the apartment or location where the defendant is confined, linked by phone line to a monitoring center.

The technology can also be used to monitor, for example, blood alcohol levels via subcutaneous sensors, or be programmed to sound an alarm if its wearer goes within a certain distance of a barred location.

Renzema said the Strauss-Kahn case reminded him of Saudi arms dealer and financier Adnan Kashoggi, who was put under house arrest in the United States over two decades ago, with an electronic tag.

“I believe at the time he had his own Boeing 727. He could have helicoptered from midtown Manhattan to LaGuardia airport before his monitor would have indicated his absence.

“I regarded the monitoring in that case as a publicity stunt. The press and public were, in effect, being told ‘See how tough we are, how we’re really controlling this dangerous fellow!'”

It is unclear if Strauss-Kahn will be in court Thursday when his lawyers try to persuade a judge to free him from jail, where he has been since allegedly trying to rape a Manhattan hotel maid last weekend.