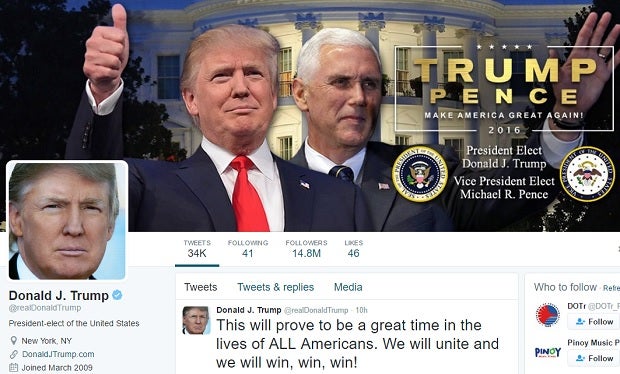 US president-elect Donald Trump is attributing his election victory to social media. Trump, whose Twitter page is shown in the picture, used social media to criticize his opponents and promote his candidacy. SCREENGRAB FROM DONALD TRUMP TWITTER ACCOUNT

WASHINGTON, United States — President-elect Donald Trump credited his provocative use of Twitter and other social media with helping him win the US elections, saying it gave him a way of “fighting back.”

In an interview that airs in full on Sunday on CBS’s “60 Minutes,” Trump said with some reluctance that he would be more restrained in his use of social media once in the White House, but said it was nothing to be ashamed of.

“The fact that I have such power in terms of numbers with Facebook, Twitter, Instagram, et cetera, I think it helped me win all of these races where they’re spending much more money than I spent. And I won,” he said, in an excerpt released late Saturday.

The Republican billionaire used Twitter to mock his opponents and blast his critics during a long and tumultuous campaign that took him from joke candidate to the most powerful office in the world.

Calling it a “great form of communication,” he boasted he has 28 million followers on social media, and picked up another 100,000 just the day before the interview.

Calling it a “great form of communication,” he boasted he has 28 million followers on social media, and picked up another 100,000 just the day before the interview.

“I’m not saying I love it, but it does get the word out,” he told interviewer Lesley Stahl.

“I find it tremendous. It’s a modern form of communication. There should be nothing we should be ashamed of. It’s where it’s at,” he added. CBB