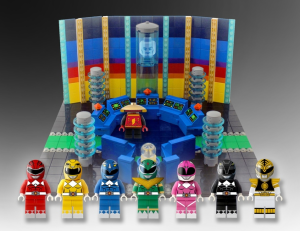 As young-at-heart fans anticipate the upcoming “Power Rangers” film, one toymaker fan decided to propose a “Power Rangers” Lego toy set, which is now one of the most popular picks online.

User bruceywan shared his mighty morphin’ idea on Lego Ideas page, which features the rangers themselves and their miniature Zordon’s command center. “Enter the Mighty Morphin Power Rangers: Zack, Kimberly, Billy, Trini, Jason and Tommy, each ready to morph and save Angel Grove from the likes of Rita Repulsa and her horde of evil space aliens,” the proposal’s description read.

“As a lifelong Lego builder, and now the proud father of two Power Rangers fans, this set seemed like a no-brainer.  Please help me make Lego Power Rangers a reality; if not for me and my sons, then for everyone to celebrate the upcoming movie and/or the Power Rangers’ 25th anniversary in 2018,” bruceywan wrote in a touching post.

Today, the proposal has attracted 3,560 supporters and has 595 days left to reach its 10,000-supporter mark before the toy giant can mass-produce the set.

This toy blueprint coincides with the release of the rousing “Power Rangers” reboot starring Bryan Cranston, Naomi Scott and Elizabeth Banks. The film will hit theaters on March 24, 2017.

Budding toy designers submit Lego proposals in hopes of having their prototypes turned into reality by the toymaker itself. Just last August, Maia Weinstock, deputy editor of Massachusetts Institute of Technology (MIT) News, proposed a toy set honoring the five women who worked behind the scenes of National Aeronautics and Space Administration’s cutting-edge space technology. Her Lego design peaked with 10,000 supporters and is now being reviewed by The Lego Group.  Gianna Francesca Catolico