A reporter covering President Rodrigo Duterte was again the target of an alleged online attack.

His cover photo was changed into a graphic that had the words “Duterte is my president” while his profile photo became the logo of the “Mocha Uson Blog,” a popular page supporting Duterte. 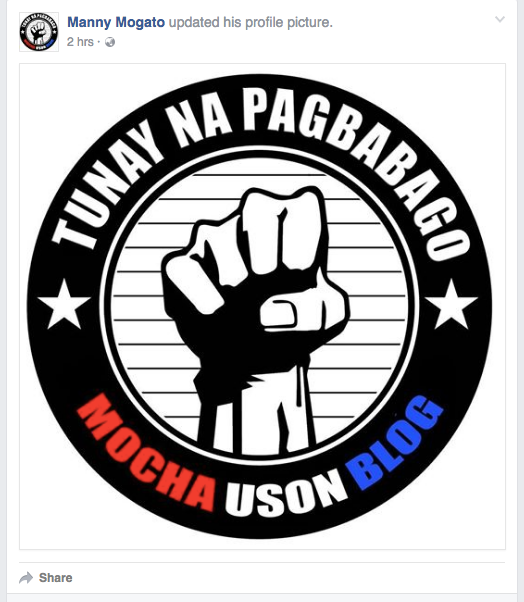 In one Facebook thread shared by local media practitioners, Mogato asked the administrator to have him removed and blocked in case his account was indeed hacked.

It is not the first time that Mogato was targeted online.

A couple of months ago, his photo and that of a fellow Reuters correspondent, Karen Lerma, circulated online with the words, “The real culprits behind the fuss over President Duterte’s Hitler comment. Irresponsible journalists must be punished.”

“There are 3 million drug addicts (in the Philippines). I’d be happy to slaughter them,” the President was quoted saying.

Mogato and Lerma’s article was lambasted by several pro-Duterte blogs.

The National Union of Journalists of the Philippines (NUJP) released a statement in reaction to the memes and threats.

““Threatening journalists when their reportage is disagreeable or erroneous is criminal, as is helping spread these threats, especially if any harm should befall the subjects of such opprobrium,” it said.

Mogato’s friend and fellow journalist Dana Batnag said she saw the changes on the Reuter correspondent’s Facebook account around 11 a.m. on Thursday.

“I took it as a joke at first, because he can do that sometimes. But then given what’s been happening lately, I thought I’d ask just the same,” she told INQUIRER.net.

Batnag said Mogato told her that his account was hacked.

Batnag warned their friends about it on Facebook and later deactivated her own account to secure it.

“I stand with Reuters journalist Manny Mogato. The hacking of his FB account is most condemnable. Sumusobra na. Hindi na tama (This is too much. It is not right),” he wrote. CDG