Green is the new blue for Windows error screens 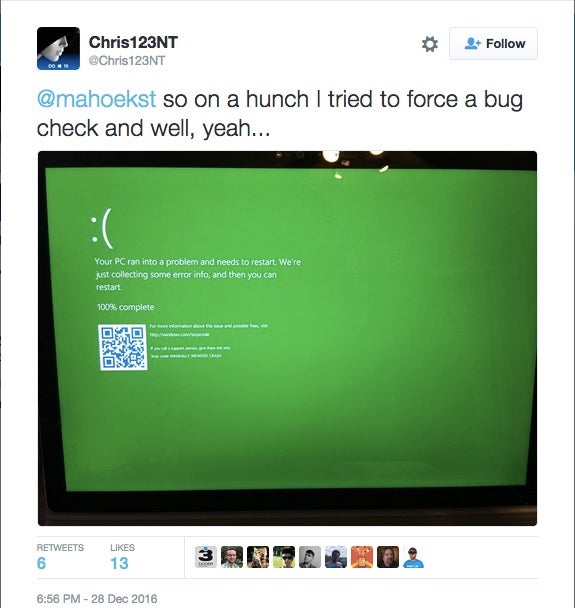 A new terror will rise to torment Windows 10 preview users. The reign of the GSOD has come. Image: Twitter/@Chris123NT

The infamous ‘blue screen of death’ or BSOD is the worst nightmare of every PC user. But for the 21st century, a new terror has risen, in the form of the ‘green screen of death.’

A leaked preview build of the Windows 10 (build 14997) has been making the rounds recently in the web. It comes with a number of features and changes, namely a new green error screen as opposed to the classic BSOD, reports The Verge.

The ‘green screen of death’ (GSOD) was initially teased by Microsoft employee Matthijs Hoekstra and then discovered by Twitter user Chris123NT.

Hoekstra later confirmed that the GSOD was for preview participants only. The likely reason is that Microsoft wants to distinguish testing build crashes versus genuine BSODs. This will come a long way in sorting out BSOD issues that Windows 10 preview users publish on blogs and social network.

For now, Windows 10 testing has been put on hold for the holiday season and will resume on January next year. Alfred Bayle