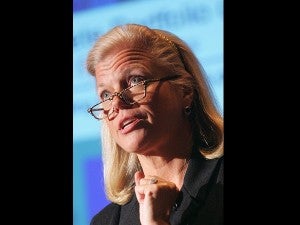 Virginia “Ginni” Rometty, a veteran at the technology giant famous for its conservative corporate culture, will take over as CEO from Sam Palmisano, IBM announced.

Palmisano has been CEO for nearly a decade and turned 60 this year. He will stay on as chairman.

Rometty, 54, takes over on Jan. 1. She is currently in charge of sales and marketing at the company based in Armonk, New York.

After she takes over the helm at IBM, women will be in charge of two of the world’s largest technology companies. Last month, Meg Whitman was named CEO of Hewlett-Packard Co.

Whitman had previously joined eBay Inc. when it was a fledgling startup during the dot-com boom and guided it to become an Internet auction powerhouse. She also ran unsuccessfully for California governor last year.

While Whitman’s HP is a sprawling company in disarray, Rometty will inherit a finely tuned IBM whose focus on the high-margin businesses of technology services and software has helped it thrive.

Their appointments are “setting a fabulous example” in the promotion of female executives, said Jean Bozman, an analyst with IDC who has followed both companies closely for years.

“It is a good sign,” Bozman said. “It does create an environment in which more of these high-ranking women executives can see that’s within reach. The more that happens, the more normal that will be. I think this might be a great sign that we’ve turned a corner. Certainly the Baby Boomers have wanted this for a long time.”

HP, of course, had another female CEO, Carly Fiorina, but her tenure ended in acrimony when she was forced out in 2005 over disappointing financials and the fallout from her hard-fought battle to buy Compaq Computer.

IBM’s move was unexpected. Palmisano had tamped down earlier talk of his retirement, insisting that he wanted to stay on as chief. In rare public comments, he said last year that he was “not going anywhere” and that there’s no formal policy at IBM dictating when a CEO should retire.

Palmisano in a statement said that Rometty has led some of IBM’s most important businesses, and was instrumental in the formation of IBM’s business services division. She oversaw IBM’s $3.5 billion purchase of PricewaterhouseCoopers’ consulting business in 2002, which is a key element of a strategy that has made IBM a widely copied company. She is “more than a superb operational executive,” Palmisano said.

“She brings to the role of CEO a unique combination of vision, client focus, unrelenting drive, and passion for IBMers and the company’s future,” Palmisano said. “I know the board agrees with me that Ginni is the ideal CEO to lead IBM into its second century.”

Bobby Cameron, an analyst with Forrester Research who has worked with IBM in various roles over the years, said that in meetings with Rometty is “engaging” and inquisitive. Her interest in emerging technologies, not just the established sales leaders, is an important characteristic. Cameron thinks she’s an ideal choice to continue Palmisano’s work.

“I think she’s smart. She asks questions; she doesn’t just come in with an agenda, and she’s interested in the leading edge, not just what’s driving volume — all those things are important for a CEO to have,” Cameron said.

“I think it will be more of the same, and I think that’s a good thing,” he said.