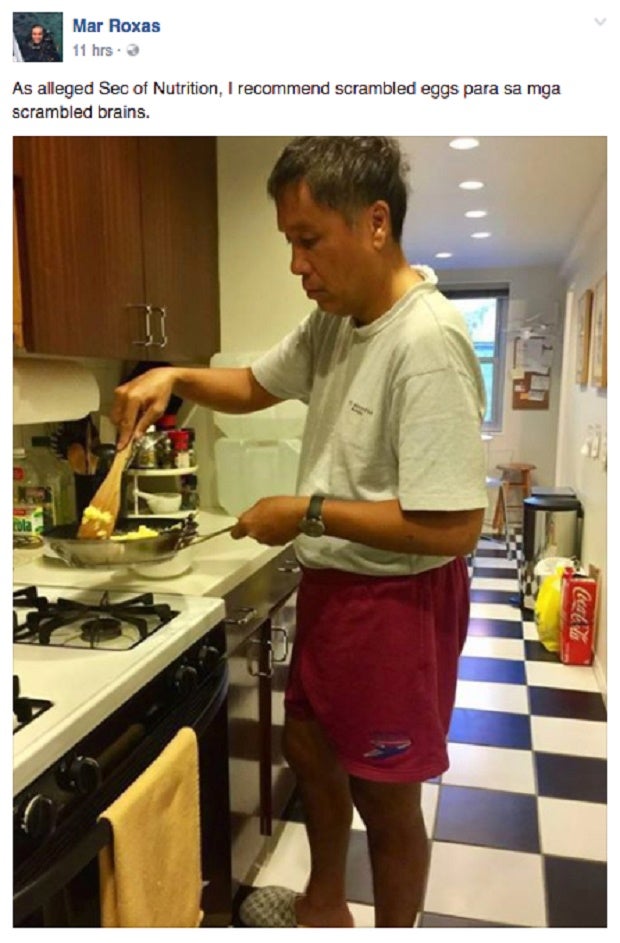 Former Interior secretary Manuel “Mar” Roxas II poked fun at a plunder complaint filed against him, which was based on a fake news article and a fictitious bank circular, with a Facebook post.

A photo, uploaded on Friday, showed the former presidential candidate cooking scrambled eggs and wearing his “pambahay,” seeming to have just gotten out of bed.

His Facebook post read: “As alleged Sec. of Nutrition, I recommend scrambled eggs para sa mga (for those with) scrambled brains,” taking the issue with a grain of salt.

Roxas was referring to a recently filed plunder case that referred to him as “secretary of the Department of Nutrition and Local Government.”

The case, which accuses former President Benigno Aquino III and his political allies of “unlawfully” receiving gold bars from a Union Bank of Switzerland account, was based on a fake news article citing a certain Bangko Sentral ng Pilipinas (BSP) circular No. 49.

READ: BSP: No such circular on shipment of gold bars

The BSP has already clarified that the circular did not exist and that it does not accept gold bullion deposits for safekeeping. CDG

LOOK: How does Mar Roxas ‘look’ for his Pokémon?