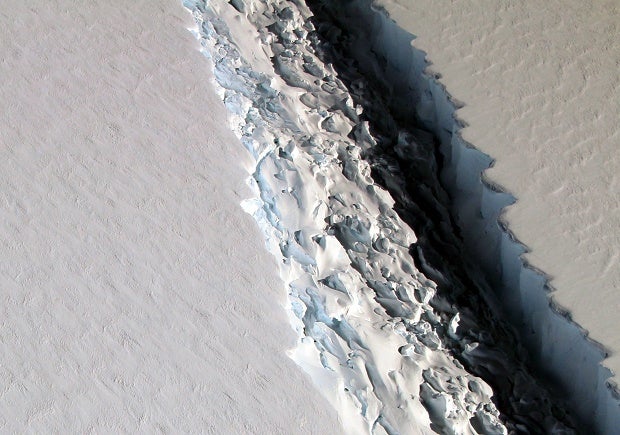 This Nov. 10, 2016 aerial photo released by NASA, shows a rift in the Antarctic Peninsula’s Larsen C ice shelf. According to NASA, IceBridge scientists measured the Larsen C fracture to be about 70 miles long, more than 300 feet wide and about a third of a mile deep. AP

WASHINGTON — Scientists are watching, but not alarmed by, a growing crack at the edge of a key floating ice shelf in Antarctica.

New images show the long-watched rift in the Larsen C ice shelf grew 11 miles (18 kilometers) in the last few weeks. The crack is now about 60 miles long (97 kilometers) and about 300 feet wide (100 meters).

If it grows another dozen miles, a Delaware-sized iceberg could break off and float away.

University of Colorado scientist Ted Scambos said that could happen soon, likely in March, and would “cut deeper to the bone” of the ice shelf, changing its shape. Ice shelves — sheets of floating ice — wrap around three-quarters of the South Pole’s coastline. They provide protection and support for inland glaciers.

Scambos, who is about to travel to Antarctica for research, and other scientists said they don’t see other key signs that this growing crack would result in a catastrophic collapse of the entire shelf. A chunk of ice will break off, “But it’s not going to lead to a runaway disintegration,” he said Friday.

That’s what happened suddenly in 2002 to the smaller Larsen B shelf, allowing inland glaciers to shrink rapidly. NASA glaciologist Jay Zwally said there’s no rapid melting with ponds of water on top of the ice this time.

“By itself this calving is not a cause for alarm,” Zwally said.

Large icebergs do periodically break off from Antarctica naturally, Zwally said. “But the ice shelf has been thinning as other ice shelves have been thinning in the Antarctic peninsula,” he said.

There’s no evidence linking this crack to climate change, yet it fits the overall warming picture, said Adrian Luckman, a researcher at Swansea University in England, which has been monitoring the crack.

ADVERTISEMENT
TOPICS: Antarctica, Climate change, ice shelves, Scientists
Read Next
Spacewalking astronauts tackle battery work outside station
EDITORS' PICK
Nograles: Cabinet members to donate 75% of monthly salary to aid COVID-19 fight
Diokno to Duterte: OK to make fun of buck tooth, but focus on people’s needs first
Quick chat with Nicole Andersson: ‘You really don’t need much to be happy’
10 Filipinos positive for COVID-19 in UK, 7 in Ireland — envoy
IATF to LGUs: Issue ordinances vs attacks on frontliners, COVID-19 patients
Robredo spox thanks Duterte for defending VP’s efforts vs COVID-19
MOST READ
Coronavirus hotbed Rizal to shut borders on April 6
ADB warns PH against prolonged lockdown
Sotto on Isko Moreno’s call: We do our job without the media following our every move
‘Money Heist,’ ‘Tales from the Loop,’ ‘Killing Eve,’ ‘Never Have I Ever,’ ‘After Life’: Five not-to-be missed series this April
Don't miss out on the latest news and information.