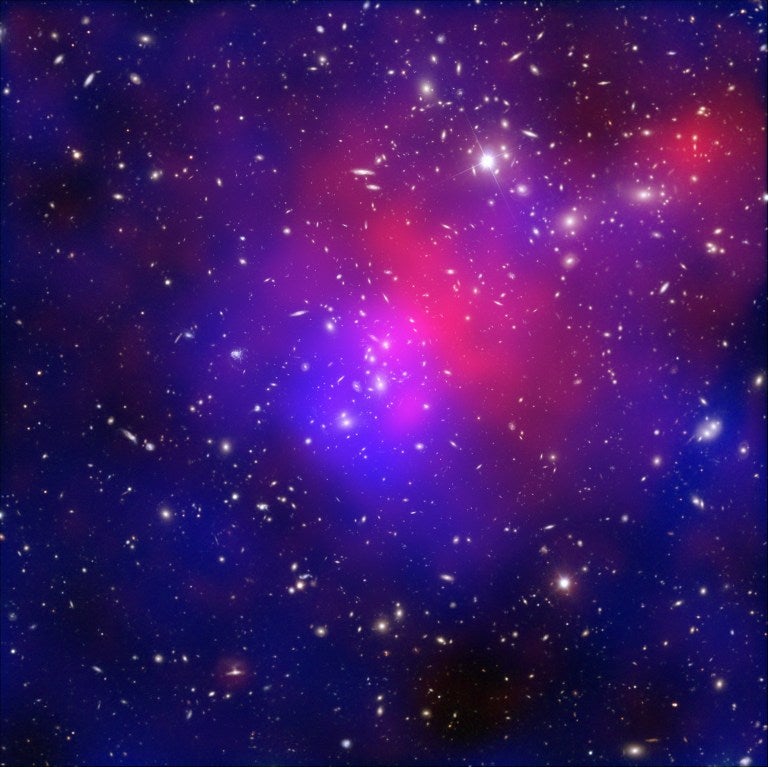 This image released on June 22, 2011, combines visible light exposures of galaxy cluster Abell 2744 taken by the NASA/ESA Hubble Space Telescope and the European Southern Observatorys Very Large Telescope, with X-ray data from NASAs Chandra X-ray Observatory and a mathematical reconstruction of the location of dark matter. The galaxies in the cluster, while they are the only part that is visible in the optical part of the spectrum, actually only provide around 5% of the mass in the cluster. Hot intracluster gas (shown in pink, and responsible for around 20% of the mass in the cluster) is visible through its X-ray emissions, observed by NASAs Chandra satellite. AFP FILE

PARIS, France — The first sighting of clustered dwarf galaxies bolsters a leading theory about how big galaxies such as our Milky Way are formed, and how dark matter binds them, researchers said Monday.

Theorized but never seen, the bundled galaxies were discovered using the largest optical survey of the night sky ever compiled, they reported in the journal Nature Astronomy.

Seven clusters of three-to-five galaxies are each 10 to 1,000 times smaller than the Milky Way.

Unlike our home galaxy, all have long-since stopped giving birth to new stars.

“We suspect these groups are gravitationally bound and thus will eventually merge to form one larger, intermediate-mass galaxy,” said lead author Sabrina Stierwalt, an astrophysicist at the National Radio Astronomy Observatory in Charlotteville, Virginia.

The findings shed light on several big questions about how structures such as galaxies formed in the early Universe, she told AFP.

A leading theory predicts that, after the Big Bang some 13.7 billion years ago, smaller things joined together to form bigger ones.

But there has been frustratingly little observational evidence of such mergers occurring on a scale as small as dwarf galaxies, Stierwalt explained.

One reason is that dwarf galaxies are hard to see. Only two — known at the Magellanic Clouds — are visible to the naked eye.

As of a decade ago, no more than a dozen had been identified by astronomers.

And even as bigger telescopes made their discovery commonplace, those found were either isolated “field dwarfs,” or “satellite dwarfs” being cannibalized by larger galaxies.

“Independent groups of only low-mass galaxies — like the ones we found — reveal a possible formation mechanism for larger ones such as our Milky Way,” Stierwalt said.

The clusters are between 200 million and 650 million light years away from Earth.

“That sounds like a lot, but it is relatively nearby given the vast size of the Universe,” she said.

The researchers spotted the galaxies by combing through a massive library of star maps compiled under a project known as the Sloan Digital Sky Survey, made public in 2008 and upgraded regularly since.

The team then used telescopes — including one at the Apache Point Observatory in New Mexico, and the Walter Baade Telescope at the Los Campanas Observatory in Chile — to confirm their findings.

Dwarf clusters are also natural laboratories for better understanding the mysterious substance known as dark matter, thought to account for a quarter of the Universe, the study found.

Likely made up of unknown sub-atomic particles, dark matter can only be inferred through its gravitational pull on other objects in space.

Visible matter — everything we can touch and see — comprises about five percent of the Universe.

Dwarf galaxies are doubly interesting in the quest to understand dark matter.

Compared to larger galaxies, “they tend to have a lot more dark matter,” explained Stierwalt.

Its gravitational force holds the clusters together.

And because they are older, these dwarf galaxies also have very little “debris” such as gas and dust, and thus are unobstructed hunting grounds for dark matter.

Some astronomers are searching for this elusive substance using gamma-ray detecting telescopes, on the theory that dark matter particles may produce gamma rays as they decay or annihilate each other in space. CBB