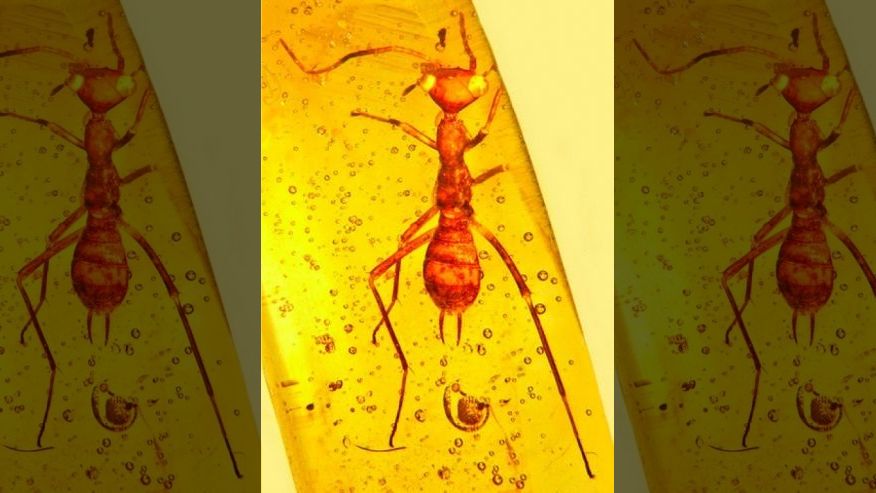 An ancient insect so strange-looking that scientists agreed it belonged to its own species and order of insects. Image: George Poinar, Oregon State University

Scientists recently uncovered a bizarre-looking insect that has been trapped in amber for over 100 million years. The strange thing about it is that the ancient insect looks very much like the popular image of an extraterrestrial (E.T.).

In fact, the insect is so strange that scientists have not been able to find any similarities to existing species or scientific order. They therefore concluded that this insect is a class all its own, reports Fox News.

The two existing specimen of this extinct insect is encased in Burmese amber and likely to have been at home in the place that is now called Burma for 100 million years now.

The insect is tiny and wingless with long thin legs. Its head is of a strange, triangular shape, accentuated by large bowl-shaped eyes and a long neck.

Researchers from Oregon State University speculate that the insect is omnivorous and ate mites as well as fungi. They also noted neck glands that secreted what they believe to have been predator-repelling chemical.

“The strangest thing about this insect is that the head looked so much like the way aliens are often portrayed,” said George Poinar, an emeritus professor of entomology at Oregon State University.

While it’s unlikely that this long-extinct insect has anything to do with the pop-culture portrayal of extraterrestials, it does say something about how the natural world’s intricate and bizarre creations can outdo human imagination. Alfred Bayle