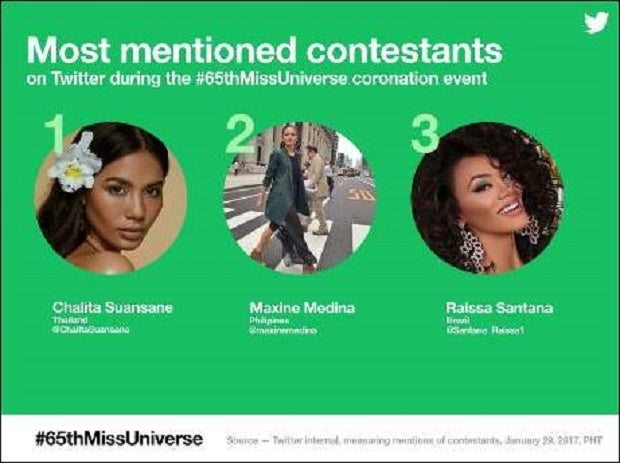 The recently concluded Miss Universe peageant in Manila which saw the Philippines’ own Pia Wurtzbach relinquishing her crown to Iris Mittenaere of France generated a record-breaking number of tweets, Twitter said on Tuesday.

Twitter said a total of 34.6 million Miss Universe-related tweets were recorded during the live event—the highest tweet volume for an entertainment event during a live show.

The most mentioned contestants during the pageant were Chalita Suansane of Thailand (Top 6), Philippine bet Maxine Medina (Top 6), and Raissa Santana of Brazil (Top 9).

It was also Thailand’s Suansane who won the Miss Universe online voting, which earned her a spot in the Top 13.

The most talked about moments were the end of the evening gown competition, end of the interview round, Miss Kenya being asked about United States President Donald Trump, end of the swimsuit segment, and the announcement of Top 6 contestants.

Despite Medina’s loss, Twitter noted that Filipino users tweeted out “big support” to the Philippine representative.

PhilHealth lost over P153B since 2013 due to fraud, PACC exec says