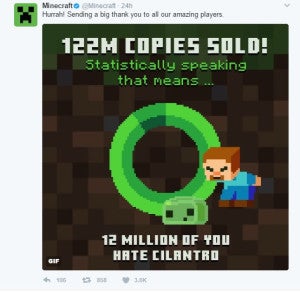 As Microsoft’s Majong simply puts it, Minecraft is “a game about placing blocks and going on adventures.”

Minecraft currently has the largest active gaming community compared with its rivals, as per reports by Business Insider.

As the hugely popular video game hit a new sales milestone of 122 million copies sold, its monthly player figures have shot up from by 37.5 percent to 55 million since previous figures were released in June last year.

The company celebrated the news by releasing animated gifs on social media to relativize the enormity of the numbers.

Originally developed by Markus “Notch” Persson, the Minecraft franchise was bought by Mojang in 2014 for $2.5 billion. JB