Bumblebees have smelly feet to help them eat–study 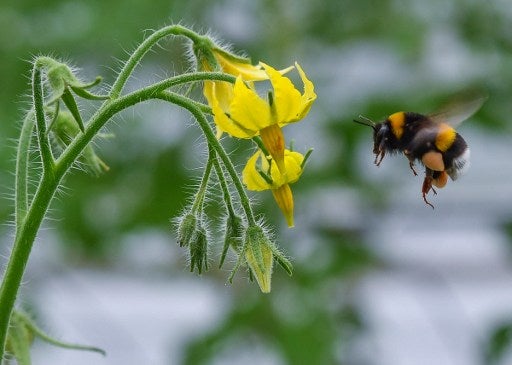 A bumblebee heads for a blooming tomato plant in a greenhouse of the Fontana Gartenbau GmbH gardening and horticultural company in Manschnow, eastern Germany, on February 20, 2017.
The company works with colonies of bumblebees to pollinate its plants.  AFP

Moreover, the odour in their tiny footprints is so potent that other bees can detect it hours after they had visited a flower, a team wrote in the journal Scientific Reports.

Adding to the intrigue, experiments showed that bumblebees can distinguish the smell of their own feet from those of other bees.

“This is the first time it has been shown that bumblebees can tell the difference between their scent and the scent of their family members” or unrelated peers, said study co-author Richard Pearce of the University of Bristol.

This means the insects can detect who had recently visited a flower — they themselves, or a different bee.

“These impressive abilities allow them to be cleverer in their search for food,” Pearce said in a statement, noting their adaptable brains.

Last month, scientists reported in the US journal Science that bumblebees can be trained to roll a ball into a goal — a skill not directly related to food foraging or other bee duties.

For the latest study, Pearce and colleagues trained bees to visit plastic, laboratory “flowers” — some containing a nectar reward and others mere water.

In three different experiments, the “flowers” were laced with different foot aromas and the bees taught to associate each smell with either a nectar reward, or none.

In one experiment, nectar-containing “flowers” always carried the foot odour of a bee’s relatives while non-rewarding flowers contained its own tracks from previous visits.

After training, came the test.

Nectar was removed from the experiment altogether, and all flowers — sporting different foot perfumes — contained nothing but water.

In the majority of cases, the bees behaved as during training.

They drank from those flowers flaunting the aroma they were taught to associate with a sugary reward, showing that the insects can tell one foot bouquet from another, the scientists said.

The scent, contained in secretions that help bees adhere to slippery surfaces such as flower petals, can linger for hours.

In the wild, bumblebees probably use this ability to sniff out what type of bee had visited a flower before them, how long it stayed, and how long ago, said Pearce.

“It has already been suggested… that bees have a strong sense of smell and could even be used as ‘sniffer bees’ in airports,” he told AFP.

“I’m not sure if their sense of smell is better than that of a dog, but I wouldn’t be surprised if it is.”