Apple unveils red iPhone 7 and 7 plus 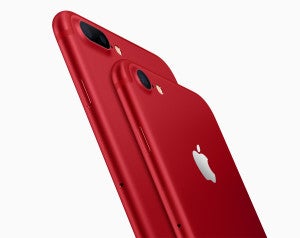 Apple’s newest product, a red iPhone 7 and 7 plus. PHOTO from Apple’s website

Apple has launched its latest phone products—iPhone 7 and 7 plus in “red apple color,” the first in its lineup of flagship phones.

The tech giant’s latest products come in a striking and vibrant red aluminum finish. Both 128GB and 256GB models will be available in Apple online stores beginning March 24, retailing at $749 (P37,500). Also, the phones will have similar features as the rose-gold, silver and jet-black editions, which were released last year.

The products were launched to celebrate the tech giant’s decade-old partnership with RED, a charity group that raises funds to combat AIDS in Sub-Saharan Africa through the Global Fund.

“Since we began working with (RED) 10 years ago, our customers have made a significant impact in fighting the spread of AIDS through the purchase of our products, from the original iPod nano (product) RED Special Edition all the way to today’s lineup of Beats products and accessories for iPhone, iPad and Apple Watch,” Apple CEO Tim Cook said in a statement.

“The introduction of this special edition iPhone in a gorgeous red finish is our biggest (product) RED offering to date in celebration of our partnership with (RED), and we can’t wait to get it into customers’ hands,” he added.

To replace the antiquated iPad Air 2, Apple showcased a 9.7-inch iPad on Tuesday, which now has a brighter Retina display. It is currently priced at $329 (P16,500).

Apple has also launched Apple Clips, an app that aims to collate photos and videos and turn them into one video that can be shared on social media.

The red variant’s debut comes at an unholy hour when tech-savvy iPhone users are waiting for the momentous release of iPhone 8, reportedly branded as “iPhone Edition,” in September.

iPhone 7 Plus and jet black variants sold out