Tech world debate on robots and jobs heats up 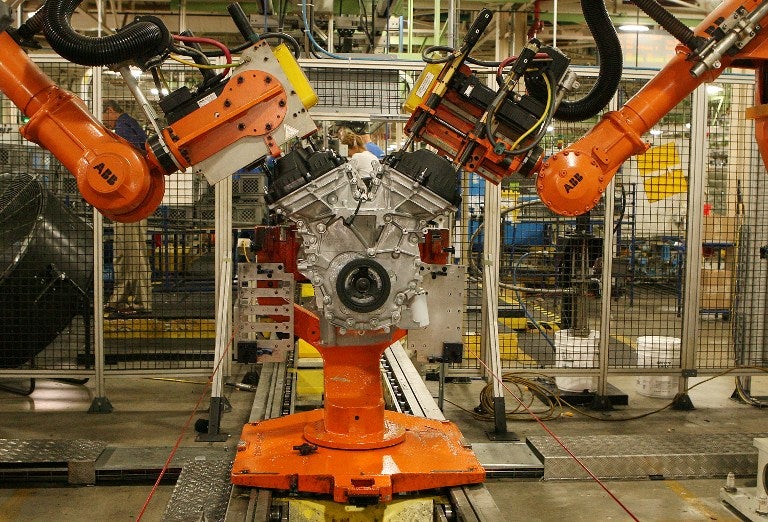 WASHINGTON, United States — Are robots coming for your job?

Although technology has long affected the labor force, recent advances in artificial intelligence and robotics are heightening concerns about automation replacing a growing number of occupations, including highly skilled or “knowledge-based” jobs.

Just a few examples: self-driving technology may eliminate the need for taxi, Uber and truck drivers, algorithms are playing a growing role in journalism, robots are informing consumers as mall greeters, and medicine is adapting robotic surgery and artificial intelligence to detect cancer and heart conditions.

Of 700 occupations in the United States, 47 percent are at “high risk” from automation, an Oxford University study concluded in 2013.

A McKinsey study released this year offered a similar view, saying “about half” of activities in the world’s workforce “could potentially be automated by adapting currently demonstrated technologies.”

Still, McKinsey researchers offered a caveat, saying that only around five percent of jobs can be “fully automated.”

Another report, by PwC this month, concluded that around a third of jobs in the United States, Germany and Britain could be eliminated by automation by the early 2030s, with the losses concentrated in transportation and storage, manufacturing, and wholesale and retail trade.

But experts warn that such studies may fail to grasp the full extent of the risks to the working population.

“The studies are underestimating the impact of technology — some 80 to 90 percent of jobs will be eliminated in the next 10 to 15 years,” said Vivek Wadhwa, a tech entrepreneur and faculty member at Carnegie Mellon University in Silicon Valley.

“Artificial intelligence is moving a lot faster than anyone had expected,” said Wadhwa, who is co-author of a forthcoming book on the topic. “Alexa (Amazon’s home hub) and Google Home are getting amazingly intelligent very fast. Microsoft and Google have demonstrated that AI can understand human speech better than humans can.”

Wadhwa calls the driverless car a “metaphor” for the future of labor and a sign of a major shift.

Warnings of dire social consequences from automation have also come from the likes of the physicist Stephen Hawking and tech entrepreneur Elon Musk, among others.

Hebrew University of Jerusalem historian Yuval Harari writes in his 2017 book, “Homo Deus: A Brief History of Tomorrow” that technology will lead to “superfluous people” as “intelligent non-conscious algorithms” improve.

“As algorithms push humans out of the job market,” he writes, “wealth and power might become concentrated in the hands of the tiny elite that owns the all-powerful algorithms, creating unprecedented social and political inequality.”

His research found that the proliferation of ATM machines did not decrease bank tellers’ employment in recent decades, and that automation of textile mills in the 19th century led to an increase in weaving jobs because it created more demand.

But he acknowledged that automation “is destroying a lot of low-skill, low wage jobs, and the new jobs being created need higher skills.”

Former president Barack Obama’s council of economic advisors also warned last year that most jobs paying less than $20 an hour “would come under pressure from automation.”

Although the net impact of robots remains unclear, tech leaders and others are already debating how to deal with the potential job displacement.

Microsoft founder Bill Gates said last month that he supports a “robot tax,” an idea floated in Europe, including by a socialist presidential candidate in France.

But Bessen, a former fellow at Harvard’s Berkman Center, said taxing robots could be counterproductive.

“You don’t want to be taxing the machines because they enable people to earn higher wages,” he said. “If you tax machines, you will slow the beneficial side of the process.”

Peter Diamandis, chairman of the X Prize Foundation for technical innovation and founder of the Silicon Valley think-tank Singularity University, is among those calling for a “universal basic income” to compensate people for job losses.

Offering income guarantees “will be one of many tools empowering self-actualization at scale,” he said in a blog post, arguing that automation will allow people “to follow their passions, be more creative.”

But Wadhwa says the problems run deeper and will require more creative solutions.

“A basic income won’t solve the social problems of joblessness because people’s identity revolves around our jobs,” he said.

“Even if we have enough food and energy, we have to deal with the social disruption that’s coming. We need a much broader discussion.”

Bessen says reversing the trends of the past decades, where high-skilled jobs gain at the expense of others, pose a “big challenge.”

“It’s entirely possible we can meet the challenge,” he said. “But the evidence in the past 20 years is that things are moving in the wrong direction.” CBB