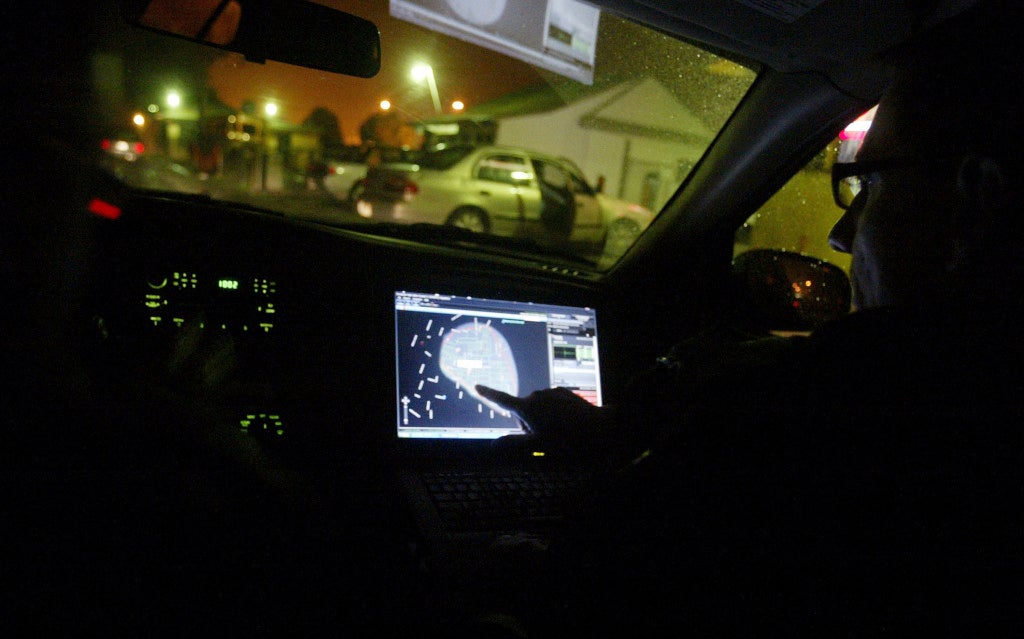 In this Dec. 31, 2008 file photo, engineer Stephan Noetzel alerts a police officer to gunshots using ShotSpotter, strategically placed acoustic sensors designed to help police track gunfire in East Palo Alto, Calif. A gunman on the loose in downtown Fresno was intent on killing as many white people as he could, taking down three people in just a few minutes Tuesday, April 18, 2017. Police Chief Jerry Dyer credits the technology that detects the sound of gunshots with allowing police to apprehend the gunman Kori Ali Muhammad just 4 minutes after his shooting rampage began, limiting the carnage to four people in all. (AP Photo/Mathew Sumner, File)

FRESNO, California — Acoustic sensors mounted on lampposts and telephone poles picked up the crack of gunfire and rapidly enabled police to zero in on where it was coming from. Within minutes, the alleged gunman in the deadly rampage was under arrest.

Fresno Police Chief Jerry Dyer credited the technology Wednesday with the swift capture of Kori Ali Muhammad, a 39-year-old black man who authorities say killed three people Tuesday in a bid to wipe out as many whites as possible.

“He was in custody within 4 minutes and 13 seconds,” Dyer said Wednesday at a news conference where he played audio clips of the ShotSpotter technology. “Kori Muhammad would be outstanding today if it wasn’t for shots-fired detection.”

SpotShotter technology has been around since 2011 and is now widely used in U.S. cities. The Fresno rampage is one of the more serious crimes in which it played a vital role.

He was charged with one count of first-degree murder Thursday in the killing of a motel security guard days before the rampage. Police said he told them Carl Williams, who was also white, showed him disrespect.

Authorities say he decided to kill more white people when he learned he was wanted in Williams’ death. Prosecutors say they are holding off on three additional charges while investigators piece together their case.

The technology police credit with stopping Muhammad is used by about 90 U.S. cities, including New York; San Francisco; Oakland, California; and Chicago, as well as Cape Town, South Africa, according to ShotSpotter. Police in Fresno have had it for the past two years.

ShotSpotter of Newark, California, requires the installation of numerous sensitive microphones. Computers and technicians at a California-based center distinguish the sound of gunfire from other noises and triangulate the shots, in much the same way that cell towers are used to zero in on the location of a cellphone.

The system can tell police the location and time the shots were fired, how many there were, and sometimes the type of weapon, the number of shooters and whether they changed location as they fired.

The information can be sent to officers on the street via their smartphones and their squad-car computer screens, as was the case in Fresno.

Police said Muhammad had tossed aside his empty gun moments before the officer pulled up. He then dived to the ground and surrendered.

A one-year contract with ShotSpotter costs $55,000 to $95,000 for each square mile. Because of the cost, cities often limit the technology to high-crime areas.

Privacy advocates criticize it for also sometimes recording speech, though the manufacturer says it is designed to ignore such noise.

Still, prosecutors used a recording of the last words of Tyrone Lyles to help convict the gunman who killed him in Oakland in 2007. Lyles called out Arliton Johnson’s nickname as he lay dying.

“It shows communities that police are aware of it and responding,” Clark said. “That builds confidence and accountability.”