NYAA is down! Image: CurrentlyDown

Anime publishers have been fighting long and hard against torrenting. Now, it appears the powers-that-be have scored a major blow to the illegal sharing of anime.

NYAA is an old torrenting site that has withstood the test of time and can be compared to The Pirate Bay when it comes to sharing anime content.

However, the site has been unreachable since May 1, according to a report from Torrentfreak.

The website CurrentlyDown registers the recent outage for NYAA started on May 1 and has continued until May 4.

The site’s reason for going offline is unknown, but records indicate that the domain names used by the site were intentionally taken down by the anyonymous site owner, according to Anime News Network.

No official statement has been released by the site owner but rumors have been circulating that the owner may be “spooked” enough by potential legal action and have ceased operations.

A lot of anime torrenting sites have closed down over the years and anime companies continue to fight the ones in operation. However, recently, their attention has turned to illegal streaming sites that compete with legal services like Crunchyroll and Daisuki.

For now, fansubbing groups have been announcing alternative means of downloading fansubbed content. 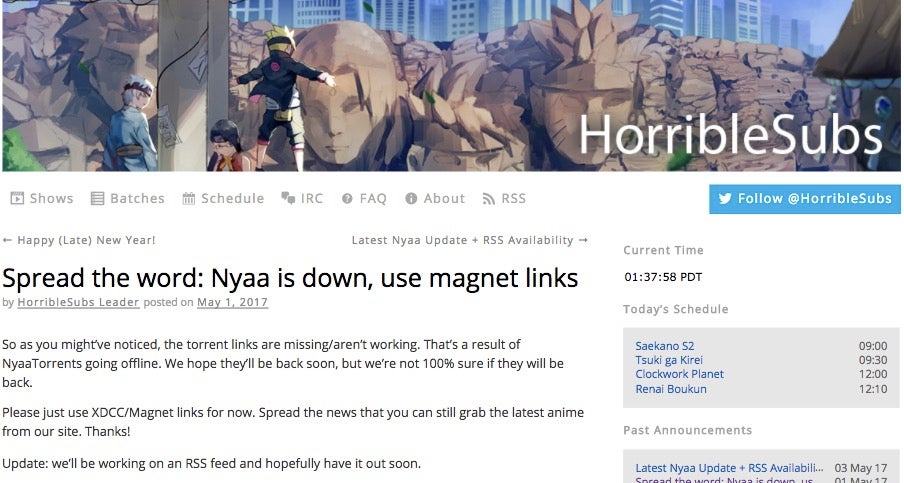 It is unclear when NYAA will return, but if we are to take the cases of The Pirate Bay and KickassTorrents, the site might soon be up again. Regardless of any outcome, fans will always find a way. Alfred Bayle/JB

Kai only one unaccounted for as Dwight enters gilas bubble