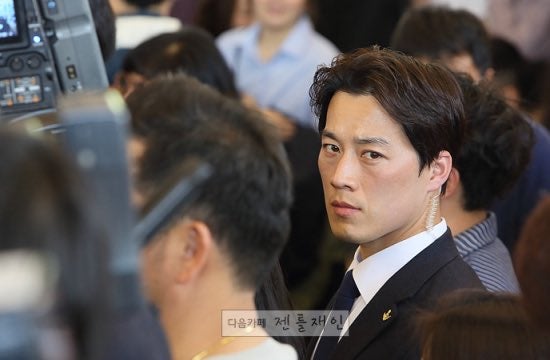 A bodyguard of South Korean President Moon Jae-in has won admirers all over the world. Image: Screen grab from Twitter/@elena_yip

South Korea has stormed the world with artists who have huge followings because of their combination of good looks, charm and talent.

However, following the election of Moon Jae-in as head of state, this fan culture would extend to politics, particularly to one of the new president’s bodyguards.

excuse me this is the new korean president’s bodyguard pic.twitter.com/aIJVhZjo28

Some see him as a potential security risk:

@elena_yip @mostlymartha Why is he so stunningly handsome. Is that safe???

@kelblogg @elena_yip The President is safe, but our hearts… less so.

There’s an adventure-romance film already in the works:

@elena_yip in a misunderstanding where he thinks she’s part of a plot to assassinate the president when really she was just bad at catering — Yulin Kuang (@YulinKuang) May 12, 2017

The Korea Times identified the bodyguard as Choi Young-jae. But, probably to the dismay of many, he is married with two daughters.

Choi is apparently part of what netizens dubbed a “handsome brigade,” referring to President Moon’s new administration that include officials who are easy on the eyes, including the head of state himself: