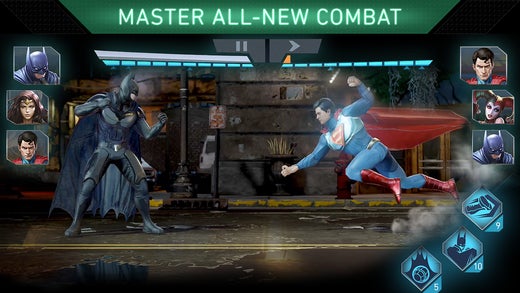 Batman and friends take on Superman and his pals in “Injustice 2” on iPhone. Image: Warner Bros./Apple, Inc. via AFP Relaxnews

Glossy superhero fighting game “Injustice 2”, image, video and audio filter suite “B612” and user-generated text-format story collection “Hooked” feature in this survey of top iOS apps as of May 12, 2017.

United States
Injustice 2 (games)
A fighting game featuring some of DC Comics’ best known heroes and villains (Batman, Wonder Woman, Superman, Harley Quinn), and a number of lesser-known characters combine in a battle to save or control the world. The top-selling in-app purchase is for a $2.99 starter pack; prices range up to $99.99.

Australia
Lottoland (entertainment)
Offering the opportunity to buy tickets to both Australian lotteries and those based in other countries.

France
Hooked – Chat Stories (books)
Thriller stories formatted as chat conversations; users can write and upload their own narratives, solo or with a group of friends. Unlimited stories come by way of a subscription fee: $2.99 a week, $7.99 per month, or $39.99 on an annual basis.

Singapore
oBike (travel)
Stationless bike-sharing service that uses location detection and QR or numeric codes to unlock each bicycle. 10-minute advanced booking feature, payments can be made via card, PayPal and other services.