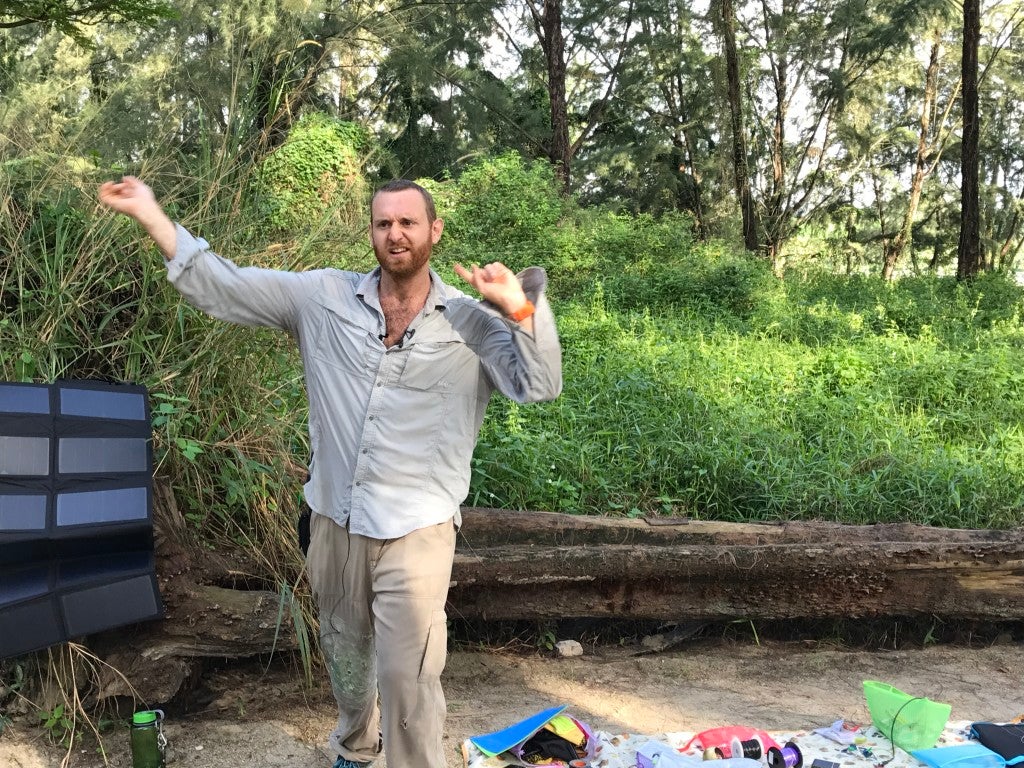 Andy Quitmeyer, the host of Discovery Channel’s Hacking the Wild, gives a demonstration on how to build simple tracking devices using simple equipment.

SINGAPORE—Less than an hour drive from the city-state’s sprawling metropolis, a tall scientist stood in the middle of a nature reserve demonstrating how to use plants as a nifty device that can detect animal movement.

A group of journalists from several countries listened patiently on how a couple of alligator clips, a computer chip, two wires, a little buzzer, and a power bank could link to a plant and create technological magic.

Rustling leaves, animal calls were then later heard from the small devices the journalists built, and as it turns out leaves can pass off as natural antennas.

As preposterous as it sounds, the partnership between a few cheap devices and a couple of stalks of plants are almost natural, and in science parlance that is called Digital Naturalism.

Andy Quitmeyer, the host of Discovery Channel’s upcoming survival show Hacking the Wild, is a pioneer in the field of Digital Naturalism, and it all stemmed from his love of nature and his career in industrial engineering.

“For me, a lot of this combining nature and technology is a lot of me reconciling the two loves that I have,” said Quitmeyer during the media preview for the new Discovery Show at Coney Island in Singapore Monday.

“Growing up I always love running around nature and playing around and looking at different creatures and insects. But I also like building stuff, making inventions, new kinds of things.”

Quitmeyer, who egged the journalists to use a soldering iron to link up the wires to the computer chips, fell in love with nature first before transitioning to engineering.

This, of course, was caused by his realization that he won’t earn as much money if he’ll go running around chasing critters than tinkering with stuff inside a workshop.

Still, Quitmeyer’s love for the environment prevailed and after graduating from University of Illinois Urbana-Champaign with a Bachelor’s degree in industrial engineering began to transition to nature conservation while making good use of what he learned in college.

Quitmeyer, in 2016, went to Dumaguete and built floating laboratories made up of bamboo while also spreading the word of protecting the environment.

“It still wasn’t completely fulfilling for me because it will be just me sitting there at the laboratory and I would make cool stuff and then we would give it to biologists and they get to run around and have fun with it,” said Quitmeyer.

While working on his Master’s degree in Digital Media at Georgia Tech, Quitmeyer had an “existential crisis” on whether he’d continue his career as an engineer or turn to a biologist.

As it turned out, he became a hybrid.

“I had a little bit of crisis, ‘wait I screwed up, I shouldn’t have been an engineer, I should’ve been a biologist,’” said Quitmeyer while motioning a confused gesture, and sitting on a log. “I’m already stuck to being an engineer, and could I fold this over to really bringing nature back in all of this and I kind of went rogue in my PhD.”

“I left the labs I was working in and I became and independent person.”

Quitmeyer got his moment of realization when he went to Panama and worked at the Smithsonian Tropical Research Institute.

“It was in the middle of the Panama rainforest and it was a kind of like a James Bond supper villain hideout,” said Quitmeyer. “There were all these scientists running around this laboratory but it was all surrounded by jungle.”

“And from that started these ideas of hacks where it was like we’re not going to be in a lab next to a jungle, now the jungle is the laboratory.”

Nerd in the jungle

Quitmeyer not only proved that technology can complement one’s experience in nature, he also broke the stereotype of survival show hosts.

By all means, Quitmeyer is not the typical host of a survival show wherein the role is usually reserved for alpha males like Bear Grylls.

“A nerd? I would say so,” said Quitmeyer. “I think that’s the big difference, because I’m the nerd and they’re the experts, it’s more like I take more of a design approach and they might know the exact way on how to survive out here, that this is what you do be macho, macho, macho.”

Quitmeyer did brandish a big knife while cutting a piece of wire during the demonstrations, but he is not someone who packs lightly on his nature trips.

With him is a backpack filled with different sorts of gizmos, a screwdriver set, countless computer chips, soldering rods filled with butane gas, and a laid-out tarpaulin containing wires, a laptop, and wire clippers.

“I’m not concerned with the macho look or anything like that, I’m just curious and I just want to see like ‘hey this would be cool or if this would work and I’m like oh no that failed horribly but there’s one part that kind of worked and why don’t we do that.’”/ac