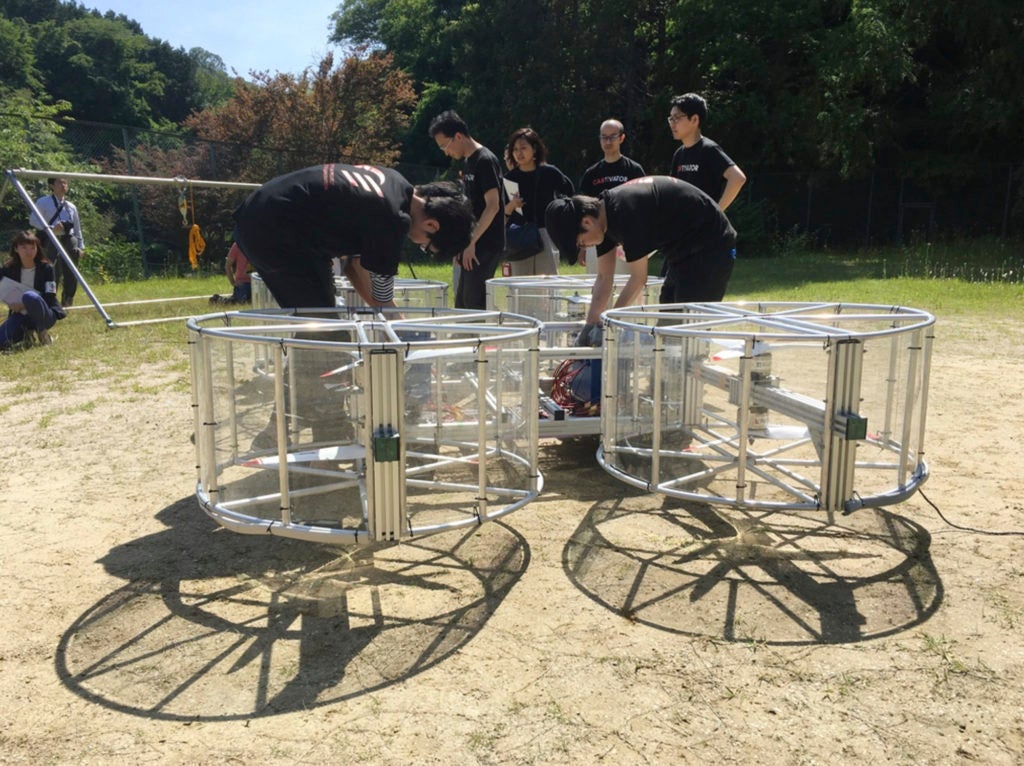 Cartivator members prepare for a test flight of their flying car model on a former school ground in Toyota, central Japan, Saturday, June 3, 2017. Cartivator Resource Management, in which Toyota invested 42.5 million yen ($386,000), showed to reporters Saturday a test flight of a concoction of aluminum framing and propellers. It took off several times, hovering as high as eye level for a few seconds, before falling to the ground. AP

A startup backed by the Japanese automaker has developed a test model that engineers hope will eventually develop into a tiny car with a driver who’ll be able to light the Olympic torch in the 2020 Tokyo games. For now, however, the project is a concoction of aluminum framing and eight propellers that barely gets off the ground and crashes after several seconds.

Toyota has invested 42.5 million yen ($386,000) in startup Cartivator Resource Management to work on “Sky Drive.” At a test flight Saturday in the city where the automaker is based, the gadgetry, about the size of a car and loaded with batteries and sensors, blew up a lot of sand and made a lot of noise.

It managed to get up as high as eye level for several seconds before tilting and falling to the ground. Basketballs attached to its bottom served as cushions. After several attempts, the endeavor had to be canceled after one of the covers got detached from the frame and broke, damaging the propellers.

The goal of Cartivator’s is to deliver a seamless transition from driving to flight, like the world of “Back to the Future,” said the project’s leader Tsubasa Nakamura.

“I always loved planes and cars. And my longtime dream was to have a personal vehicle that can fly and go many places,” he told The Associated Press.

The group is now working on a better design with the money from Toyota with the plan to have the first manned flight in 2019. No one has ridden on Sky Drive yet, or any drone, as that would be too dangerous.

Still, dabbling in businesses other than cars is Toyota’s trademark. In recent years, it has been aggressively venturing into robotics and artificial intelligence, investing a billion dollars in a research and development company in Silicon Valley. It’s also working in Japan on using robotics to help the sick walk.

It also just announced a five-year $35 million investment in its research center in Ann Arbor, Michigan, for autonomous and connected vehicle technologies.

READ: Toyota invests $1 billion in artificial intelligence in US

The idea that each generation must take up challenges is part of Toyota’s roots, said auto analyst Takaki Nakanishi.

President Akio Toyoda’s great-grandfather Sakichi Toyoda started out developing the loom and then its automated improvements from the 1890s, before the company became an automaker. More recently, Toyota sees software and services as central to the auto industry, as cars become connected, start driving themselves and turn into lifestyle digital tools, Nakanishi said.

As Toyota gets into the business of ecological vehicles, such as hybrids, electric cars and fuel cells, it’s turning into an energy company as well.

Toyota is traveling not only in the skies but also to the waters, although that still remains a tiny part of its sprawling empire.

Toyota’s boat operations began in 1997. Toyota now offers four models and has sold a cumulative 845 boats. In contrast, Toyota sells about 10 million vehicles a year around the world.

Reporters recently got a ride in Tokyo Bay of a Lexus luxury concept “yacht,” which runs on two gas engines. With a streamlined curvaceous design, inspired by a dolphin and evocative of a Lexus car, it’s being promised as a commercial product in the next few years.

Designed for executives zipping through resort waters, it comes with fantasy-evoking features, like an anchor pulled in by a chain into a tiny door in the bow, which opens then closes mechanically.

The engine, shiny like a chrome sculpture, is visible beneath the sheer floor surface. Shigeki Tomoyama, the executive in charge, said the boat was going for “a liberating effect.” A price was not given. Many Americans have already expressed interest, according to Toyota.

The project started about two years ago under direct orders from Toyoda, who has with Tomoyama spearheaded Toyota’s Gazoo internet business, another non-auto business for Toyota.

“He asked us to create a space that can work as a secret hiding place in the middle of the ocean,” Tomoyama said. “We went for the wow factor, which requires no words.”