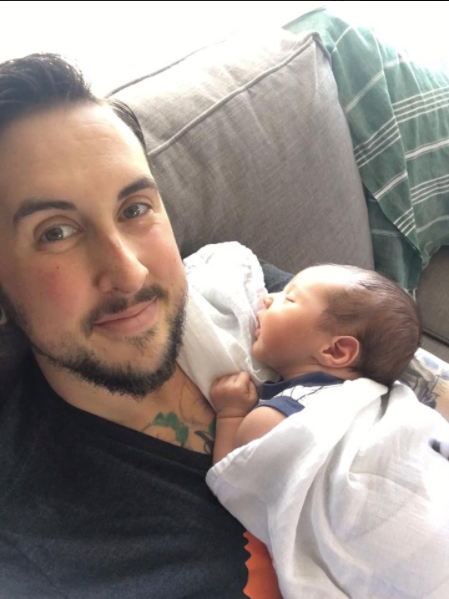 Trystan Reese with baby Leo.  Image from Facebook/Biff and I

Birthing a baby is usually reserved for the female population, but one transgender man has defied the odds and successfully delivered a healthy baby boy.

Oregon,USA-native Trystan Reese and his male partner Biff Chaplow welcomed their first biological offspring, Leo, last month. The couple were already adoptive parents of two children, but decided to expand their growing family, according to the Oregon Live.

However,  the 34-year-old Reese, who was born female, thought he missed his chance to bear a child after suffering a miscarriage in their first attempt. He reverted to taking hormones regularly, but stopped when he became pregnant again to baby Leo.

“I would say it’s unique,” Resse described his pregnancy in a separate report from Fox News. “I understand that people are not used to two men having a biological child.”

The couple documented their unusual pregnancy journey on their joint Facebook page “Biff and I,” which has garnered support from netizens all over the world.

Despite receiving well wishes from most people, Reese shared how they were also subjected to a decent amount of criticism online.

“People get the idea that this was some experiment that we embarked on,” he told the news outlet. ”This is tested ground. This is something that has been done in a very safe and healthy way. We’re loath to be put in that pioneer category.”

The advancement of science has certainly aided transgender men over the years, as it allows them to conceive and deliver babies even after going through the transition process.

The couple has since returned to their home with baby Leo and wished that people would keep an open mind regarding their peculiar family situation.

“If you can understand that then it starts to make more sense that it would not seem totally bizarre for me to want to create and carry a baby, because I don’t wish that my body was not a trans body,” he said. “I’m OK being a man who has a uterus and who has the capacity and capability of carrying a baby.”  Khristian Ibarrola /ra