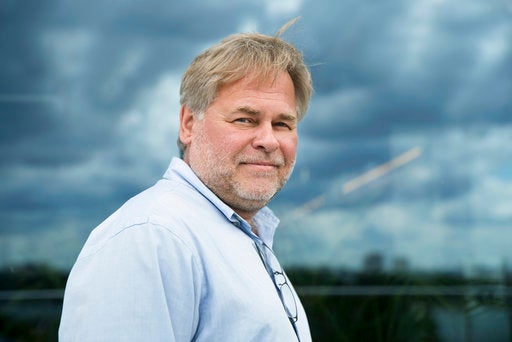 FILE – In this July 1, 2017, file photo, Eugene Kaspersky, Russian antivirus programs developer and chief executive of Russia’s Kaspersky Lab, poses for a photo on a balcony at his company’s headquarters in Moscow, Russia. On Sept. 13, the U.S. banned the use of computer software supplied by Kaspersky Lab at federal agencies because of concerns about the company’s ties to the Kremlin and Russian spy operations. The directive issued by acting Secretary of Homeland Security Elaine Duke comes as various U.S. law enforcement and intelligence agencies and several congressional committees are investigating Russian meddling in the 2016 presidential election. (AP Photo/Pavel Golovkin, File)

Dmitry Peskov told journalists on Thursday the U.S. move “cast a shadow over the image of our American colleagues as reliable partners” and was designed to cripple Kaspersky’s competitive advantage on the international market.

The U.S. cited concerns about Kaspersky’s ties to Russian intelligence services as the reason for the ban, which was announced Wednesday. The anti-virus company has repeatedly denied the existence of any such ties.

Anton Shingarov, Kaspersky’s vice president of public relations, says Thursday in Moscow that “this is part of a geopolitical game … There is no proof provided of any improper ties to the Russian government.”