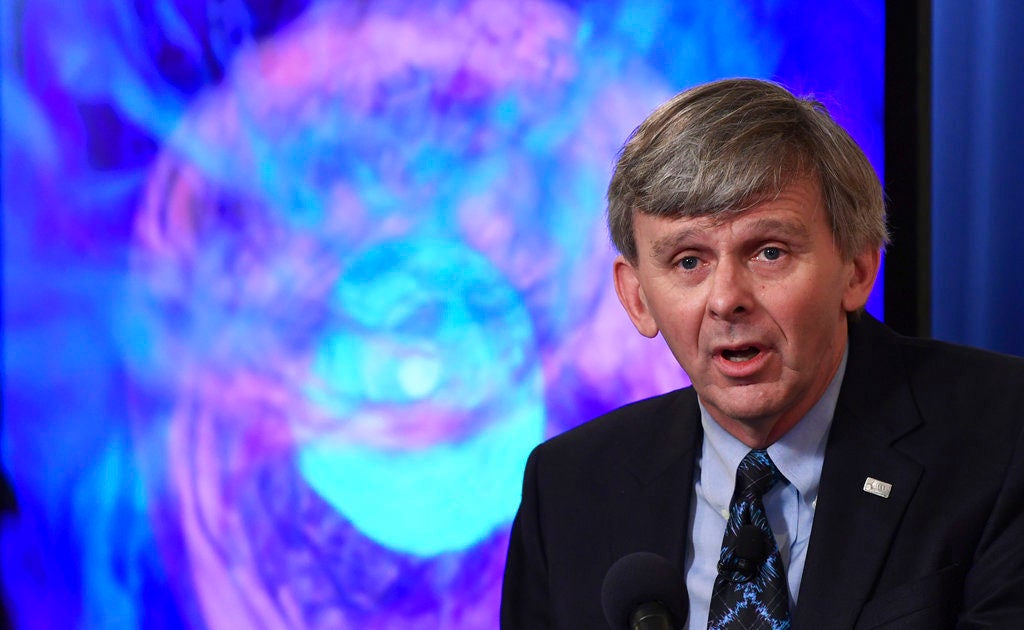 David Reitze of the California Institute of Technology and the executive director of the Laser Interferometer Gravitational-Wave Observatory, or LIGO, speaks at the National Press Club in Washington, Monday, Oct. 16, 2017, during an announcement on one of the most violent events in the cosmos that was witnessed completely for the first time in August and tells scientists where gold and other heavy elements come from. AP

WASHINGTON, United States — It was a faint signal, but it told of one of the most violent acts in the universe, and it would soon reveal secrets of the cosmos, including how gold was created.

Astronomers around the world reacted to the signal quickly, focusing telescopes located on every continent and even in orbit to a distant spot in the sky.

What they witnessed in mid-August and revealed Monday was the long-ago collision of two neutron stars — a phenomenon California Institute of Technology’s David H. Reitze called “the most spectacular fireworks in the universe.”

“When these things collide, all hell breaks loose,” he said.

Measurements of the light and other energy emanating from the crash have helped scientists explain how planet-killing gamma ray bursts are born, how fast the universe is expanding, and where heavy elements like platinum and gold come from.

“This is getting everything you wish for,” said Syracuse University physics professor Duncan Brown, one of more than 4,000 scientists involved in the blitz of science that the crash kicked off. “This is our fantasy observation.”

It started in a galaxy called NGC 4993, seen from Earth in the Hydra constellation. Two neutron stars, collapsed cores of stars so dense that a teaspoon of their matter would weigh 1 billion tons, danced ever faster and closer together until they collided, said Carnegie Institution astronomer Maria Drout.

The crash, called a kilonova, generated a fierce burst of gamma rays and a gravitational wave, a faint ripple in the fabric of space and time, first theorized by Albert Einstein.

“This is like a cosmic atom smasher at a scale far beyond humans would be capable of building,” said Andy Howell, a staff scientist at the Las Cumbres Observatory. “We finally now know what happens when an unstoppable force meets an immovable object and it’s a kilonova.”

The crash happened 130 million years ago, while dinosaurs still roamed on Earth, but the signal didn’t arrive on Earth until Aug. 17 after traveling 130 million light-years. A light-year is 5.88 trillion miles.

Signals were picked up within 1.7 seconds of each other, by NASA’s Fermi telescope, which detects gamma rays, and gravity wave detectors in Louisiana and Washington state that are a part of the LIGO Laboratory, whose founders won a Nobel Prize earlier this month. A worldwide alert went out to focus telescopes on what became the most well-observed astronomical event in history.

Before August, the only other gravity waves detected by LIGO were generated by colliding black holes. But black holes let no light escape, so astronomers could see nothing.

This time there was plenty to see, measure and analyze: matter, light, and other radiation. The Hubble Space Telescope even got a snapshot of the afterglow.

Finding where the crash happened wasn’t easy. Eventually scientists narrowed the location down to 100 galaxies, began a closer search of those, and found it in the ninth galaxy they looked at.

It is like “the classic challenge of finding a needle in the haystack with the added challenge that the needle is fading away and the haystack is moving,” said Marcelle Soares-Santos, an astrophysicist at Brandeis University.

“The completeness of this picture from the beginning to the end is unprecedented,” said Columbia University physics professor Szabolcs Marka. “There are many, many extraordinary discoveries within the discovery.”

The colliding stars spewed bright blue, super-hot debris that was dense and unstable. Some of it coalesced into heavy elements, like gold, platinum and uranium. Scientists had suspected neutron star collisions had enough power to create heavier elements, but weren’t certain until they witnessed it.

“We see the gold being formed,” said Syracuse’s Brown.

Calculations from a telescope measuring ultraviolet light showed that the combined mass of the heavy elements from this explosion is 1,300 times the mass of Earth. And all that stuff — including lighter elements — was thrown out in all different directions and is now speeding across the universe.

Perhaps one day the material will clump together into planets the way ours was formed, Reitze said — maybe ones with rich veins of precious metals.

“We already knew that iron came from a stellar explosion, the calcium in your bones came from stars and now we know the gold in your wedding ring came from merging neutron stars,” said University of California Santa Cruz’s Ryan Foley.

The crash also helped explain the origins of one of the most dangerous forces of the cosmos — short gamma ray bursts, focused beams of radiation that could erase life on any planet that happened to get in the way.  These bursts shoot out in two different directions perpendicular to where the two neutron stars first crash, Reitze said.

Luckily for us, the beams of gamma rays were not focused on Earth and were generated too far away to be a threat, he said.

Scientists knew that the universe has been expanding since the Big Bang. By using LIGO to measure gravitational waves while watching this event unfold, researchers came up with a new estimate for how fast that is happening, the so-called Hubble Constant. Before this, scientists came up with two slightly different answers using different techniques.  The rough figure that came out of this event is between the original two, Reitze said.

The first optical images showed a bright blue dot that was very hot, which was likely the start of the heavy element creation process amid the neutron star debris, Drout said. After a day or two that blue faded, becoming much fainter and redder. And after three weeks it was completely gone, she said.

This almost didn’t happen. Eight days after the signal came through, the LIGO gravitational waves were shut down for a year’s worth of planned upgrades. A month later the whole area where the crash happened would have been blocked from astronomers’ prying eyes by the sun.

Scientists involved with the search for gravitational waves said this was the event they had prepared for over more than 20 years.

The findings are “of spectacular importance,” said Penn State physicist Abhay Ashtekar, who wasn’t part of the research. “This is really brand new.”

Almost all of the discoveries confirmed existing theories, but had not been proven — an encouraging result for theorists who have been trying to explain what is happening in the cosmos, said France Cordova, an astrophysicist who directs the National Science Foundation.