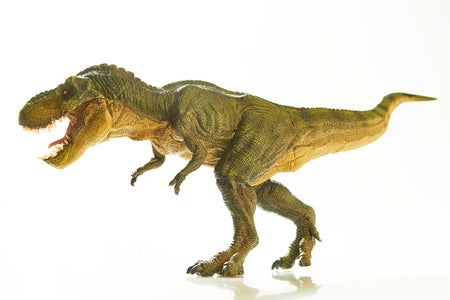 As vicious as an apex predator the Tyrannosaurus Rex (T-Rex) was, the creature has been getting flak online for its seemingly unimpressive and stunted arms.

But contrary to the public perception, the T-Rex’s stubby arms were actually among his ruthless weapons, according to one expert paleontologist.

Earlier studies suggested that its small upper limbs were either used to grasp struggling prey, help resting dinosaurs push themselves up from the ground, or grip tight to mates during sex.

However, Dr. Steven Stanley from the University of Hawaii in Manoa believes the short arms were used for “vicious slashing” at close quarters.

“Its short, strong forelimbs and large claws would have permitted T. rex, whether mounted on a victim’s back or grasping it with its jaws, to inflict four gashes a meter (three feet) or more long and several centimeters (more than an inch) deep within a few seconds,” Stanley wrote in his study, as relayed by The National Geographic.

He added that the beast certainly made use of the four-inch-long claws to inflict deep wounds on its unfortunate prey, which could have been repeated “multiple times in rapid succession.”

Furthermore, Dr. Stanley noted that the T-Rex possessed an unusual quasi-ball-and-socket joint, which would have been ideal for slashing since it could move in several directions.

He also noted that the creature’s ancestors most likely had longer limbs, but evolved to support the massive weight of the rest of its upper body.

“No longer being selected for, the arms were selected against: the expansion of the head deprived them of nutrition in a zero-sum game,” said Stanley. “Then, as the arms approached their final size, natural selection kicked in opportunistically and put them to good use for slashing at close quarters.”

He added: “It might be that the arms were actually more functional in young T. rex, and became reduced in function as it became older,” he explained.

“The strike zone would be proportionately larger in a young T. rex – and going after smaller prey would mean the force required to kill the victim would be less.”  Khristian Ibarrola /ra

TOPICS: Dr. Steven Stanley, short arms, Tyrannosaurus rex, University of Hawaii
Read Next
Osama the gamer: A list of Bin Laden’s video games from his hard drive
EDITORS' PICK
Wilder says costume wore him down before Fury did
Mallorca City: Home of Cavite’s finest industrial hub
Here’s How Protein and Calcium Deficiency Can Affect Your Kid’s Health
Desperate to stop spread of COVID-19, countries limit travel
Groups repeat call for justice, press freedom 34 years after People Power revolt
‘Are you still alive?’ Virus fears grip South Korean city
MOST READ
Dominguez: ABS-CBN account on unaired ads ‘does not tally’ with Duterte campaign experience
Macalintal: No such thing as ‘secret marriage’ amid Sarah-Matteo nuptials leak
ABS-CBN can’t operate beyond May 4 without a franchise – ex-CJ Puno
No need for Ginebra to reach out to Slaughter, says Chua
Don't miss out on the latest news and information.