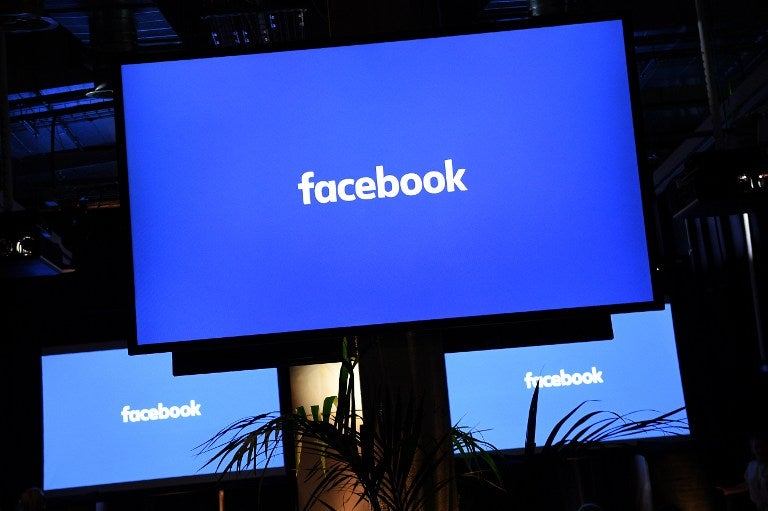 Facebook logo is pictured on a screen. (Photo by JUSTIN TALLIS / AFP)

The government has partnered with Facebook to put up a high-speed internet infrastructure in a few years time, promising a capacity that would be “almost equal” to that of the giants of the telecommunications industry.

This was announced in a joint statement issued by the Department of Information and Communications Technology (DICT) and the state-owned firm Bases Conversion and Development and Development Authority (BCDA).

Officials of the DICT and BCDA and have signed a landing party agreement with Facebook for the project, which would be called the Luzon Bypass Infrastructure.

The project would build an “ultra high speed information highway,” which the government said would improve the speed, affordability, and accessibility of broadband internet across the country.

Under the agreement, BCDA would bid out the construction of the infrastructure, which would consist of two cable landing stations placed on the east and west coasts of Luzon.

An official of BCDA, who requested to remain anonymous, said that they would soon be bidding out the project for the cable landing stations at the cost of P975 million.

Eliseo Rio Jr., officer in charge of the DICT, said the department would operate the Luzon Bypass Infrastructure for 25 years, noting that it would maintain the facilities and provide “last mile connectivity” in the country.

The project is expected to go online in 2019.

For its part, Facebook would construct and operate the submarine cable system that will land in the said cable stations, providing the company with direct connections from Luzon to internet hubs in the United States and Asia.

Officials declined from disclosing how much Facebook would be investing for the submarine cable system.

In exchange for utilizing the bypass infrastructure, Facebook will provide the Philippines with a spectrum equivalent to at least two million megabits per second (mbps), or two terabits per second (tbps).

“This 2 tbps is almost equal to the current combined capacity of Globe and Smart PLDT,” Rio said during the ceremonial signing of the agreement, referring to the two telco giants who currently dominate the industry amid consumer complaints about turtle-paced internet speed in the country.

The infrastructure takes advantage of the Philippine geography, Rio said, since it would provide a bypass route for international submarine cable owners “seeking diversity from the Luzon Strait, which has a history of multiple simultaneous submarine cable breakdowns.

Facebook would be the first to make use of this infrastructure.

He said the project is an “integral part” of the national broadband plan, significantly cutting the government’s internet costs while at the same time improving internet speed.

Rio said this would ease the implementation of other products such as the free public wi-fi and the national government portal.

He also said that this forms part of the government’s strategy to enable the third player in the telco industry, which he said would be made up of “smaller players” such as small internet service providers (ISPs) and electrical cooperatives.