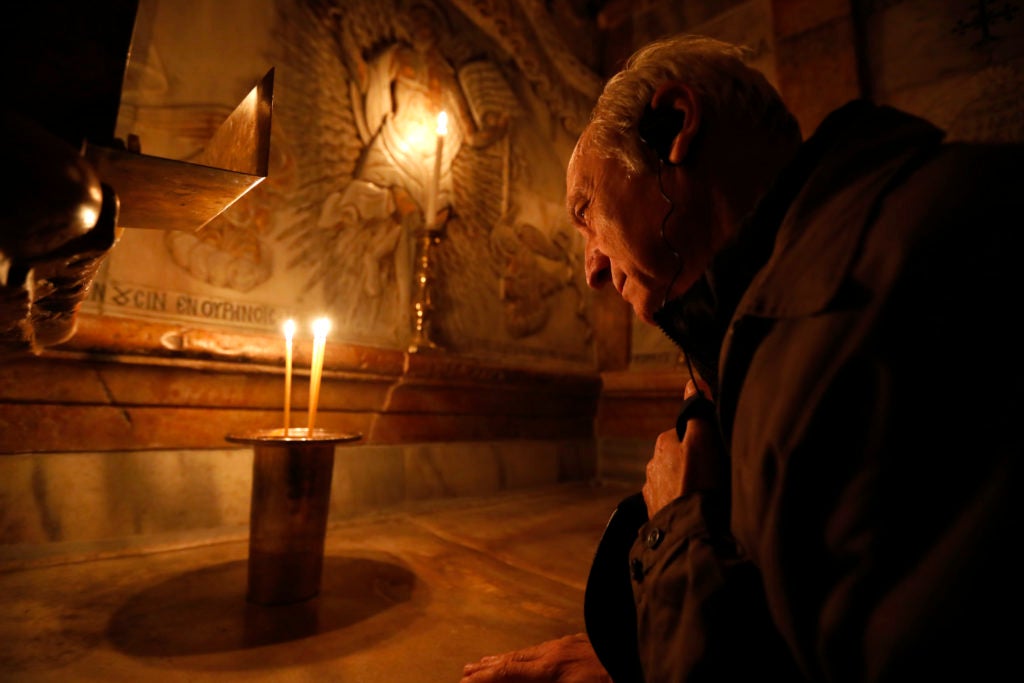 A Christian worshipper prays inside the Edicule surrounding the Tomb of Jesus (where his body is believed to have been laid) at the Church of the Holy Sepulchre in Jerusalem’s Old City on March 21, 2017.
/ AFP PHOTO / Gali TIBBON

Scientific testing at what is believed to be Jesus’s tomb dates material there to the fourth century, supporting traditional beliefs surrounding the site, an expert involved in the study said Tuesday.

The study offers no further evidence whether or not Jesus was actually buried at the site in Jerusalem, but was consistent with the historical belief that the Romans built a monument there some 300 years after his death.

It is the first time such testing has been carried out at the site, located at what is now the Church of the Holy Sepulchre and encased in an elaborate shrine, or edicule.

The tests on mortar at the site were done in connection with recent restoration work, which saw the cave where Jesus is believed to have been buried opened for the first time in centuries.

Antonia Moropoulou, chief scientific coordinator of the restoration works, said the testing was consistent with historical beliefs that the Romans built a monument at the presumed tomb during the era of Constantine the Great, circa 326.

“This is a very important finding because it confirms that it was, as historically evidenced, Constantine the Great responsible for cladding bedrock of the tomb of Christ with the marble slabs in the edicule,” said Moropoulou, a specialist in preservation from the National Technical University of Athens.

The dating of the mortar shows historical continuity at the site, stretching through the Byzantine era, the Crusades, the Renaissance period and beyond, she said.

Tradition holds that Constantine had the monument to Jesus built on what was thought to be the site of his burial as he began the Roman empire’s transition to Christianity in the fourth century AD.

Other monuments were built over it in later years.

The Church of the Holy Sepulchre houses the shrine today, along with the nearby presumed site of Jesus’s crucifixion — the holiest sites in Christianity.

In March, the newly restored shrine surrounding the tomb was unveiled following months of delicate work.

A 19th-century edicule surrounds the tomb with an onion-shaped dome above.

In October 2016, perhaps the most dramatic moment in the renovation occurred when the cave thought to be the tomb of Jesus was opened for the first time in centuries.

The Greek Orthodox, Armenian and Roman Catholic denominations share custody of the church, but disputes between the three had led to renovations being delayed for decades. /jpv