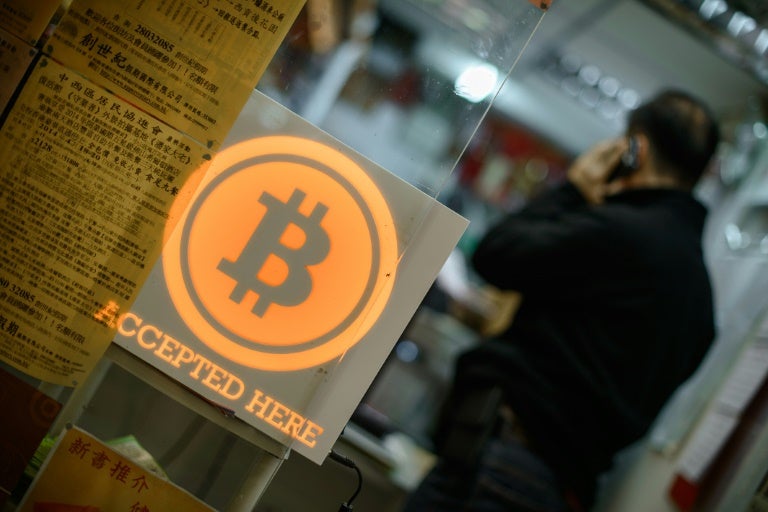 Bitcoin is bubbling, but one British man is millions down — on paper at least — after losing his digital codes of ownership when he threw an old computer away. Image: Philippe Lopez AFP

A British convert to virtual currency Bitcoin, whose value has in recent days topped $11,000, had mixed feelings Wednesday as he contemplated a portfolio ostensibly worth $108 million — but beyond his grasp.

James Howells was an early convert to the technology long before Bitcoin, dubbed “digital gold,” became all the rage, its value soaring some 1,400 percent since the start of the year.

Exactly 12 months ago the unit, not accepted by any central banks but steadily gaining traction as a store of value or virtual commodity, was worth $732 — though its volatility is such that having soared past $11,000 Wednesday it slipped down to around $10,800 by mid-afternoon.

That relative downturn was set to complete a rollercoaster of a day for Howells, whose portfolio was worth $107,919,144 around lunchtime — a neat overnight profit of $12 million or a handy $4million since breakfast.

Sadly, there’s a big snag for Howells, whose portfolio is boosted by his also ‘owning’ allocated units of breakaway coins Bitcoin Cash and Bitcoin Gold.

Four years ago, the 32-year-old threw out an old computer — on whose hard drive were the ownership codes of his 7,500 Bitcoin stash, worth around $700,000 at the time.

The value of the haul has since soared into the stratosphere — but his sole proof of ownership now lies buried below tons of household trash in a landfill in Newport, Wales.

“Yeah, the codes on my hard drive would be worth $100 million today. I know the public address where the funds are held so I can see them … it’s like having millions of dollars in your bank account, but not being able to spend it,” Howells told AFP on Wednesday.

“But I’m not sat here crying about it, accidents happen. They are still there, just inaccessible,” the IT worker reflected.

Despite his misfortune, Howells said he was “happy Bitcoin has taken off so well.”

Some observers are convinced the sky is the limit for Bitcoin — Wences Casares, a member of PayPal’s board of directors, recently speculated it could even hit a million dollars inside a decade.

Howells continues to invest in crypto as he is convinced it is the future.

“I don’t believe crypto is based on fresh air, I genuinely believe cryptocurrencies are the new gold/oil/water combined… a new era.

“The next logical step in the connected world is a worldwide internet based cryptocurrency,” he said. AB