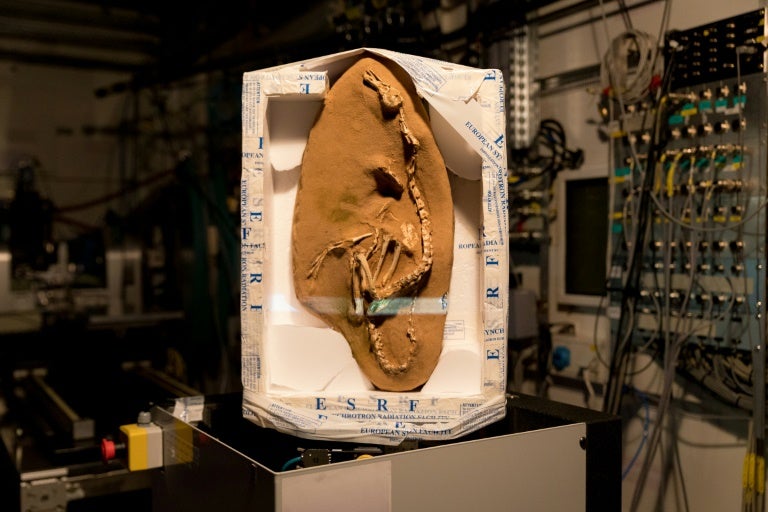 A new species of semi-aquatic dinosaurs that could kill prey on land and in water has been discovered by scientists, researchers said Wednesday.

The swan-necked and flipper-forelimbed creature was related to velociraptors — made famous by the “Jurassic Park” films — and lived about 75 million years ago, in what is now Mongolia.

“You have to imagine a mix between a velociraptor, an ostrich and a swan, with a nose of a crocodile and the wings of a penguin,” said Paul Tafforeau, a paleontologist at the European Synchrotron Radiation Facility (ESRF) in Grenoble, France, and co-author of the study.

“It’s a little extraterrestrial,” he said.

Scientists made the discovery after studying a fossil, nicknamed “Halszka” for Halszkaraptor escuilliei, which was found at Ukhaa Tolgod in southern Mongolia, a well-known spot for dinosaur enthusiasts searching for the skeletal remains of the long-lost creatures.

The well-preserved fossil had an unexpected mix of features which indicate that some bird-like dinosaurs walked on land and adapted to a semi-aquatic lifestyle, the scientists said in a study published in Nature, noting this was the first such discovery.

“Halszka was able to run and hunt on land and capable of swimming and fishing in the water,” Tafforeau said.

Parts of the skeleton were shared with carnivorous dinosaurs such as velociraptors; it had “killer claws” on its feet; stood about 1.2 metres (3.9 feet) high; had flipper-style forelimbs to manoeuver in water like penguins; and a long neck for hunting, similar to a swan.

“The first time I examined the specimen, I even questioned whether it was a genuine fossil,” said Andrea Cau, from the Capellini Geological Museum in Bologna, Italy.

“This unexpected mix of traits makes it difficult to place Halszka within traditional classifications.”

Adding to the scientists’ skepticism over whether they had discovered a new species was the convoluted journey the fossil had made after being discovered.

“(It was) illegally exported from Mongolia. Halszka resided in private collections around the world before it was acquired in 2015 and offered to paleontologists for study and to prepare its return to Mongolia,” said Pascal Godefroit, from the Royal Belgian Institute of Natural Sciences in Brussels.

Detailed analysis of the fossil was made possible by technological developments at the ESRF. Scientists used a form of X-ray microtomography to reveal a virtual 3D model of parts of the skeleton still partially buried in the rock.

The discovery will now be part of a new dinosaur subfamily, the Halszkaraptorinae.

“We knew of dinosaurs which eat fish, notably the Spinosaurus (which killed the Tyrannosaurus in “Jurassic Park 3″), but we did not think they could swim!” Tafforeau said. AB