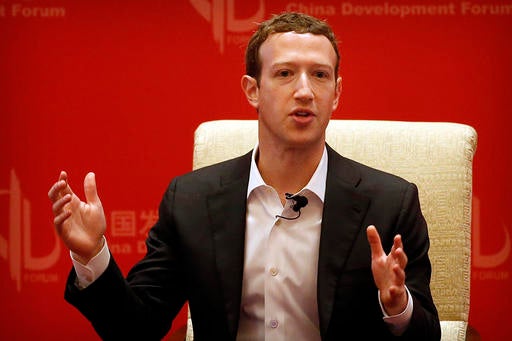 In this Saturday, March 19, 2016, file photo, Facebook CEO Mark Zuckerberg speaks during a panel discussion held as part of the China Development Forum at the Diaoyutai State Guesthouse in Beijing.  AP/Mark Schiefelbein, File

Up until recently, Facebook CEO Mark Zuckerberg and his wife, Priscilla Chan, held an aura of invincibility on the social media platform, as the pair were deemed “unblockable.”

Those who tried to do so only received an error message, which said: “Block Error. Sorry, there was a problem blocking Mark Zuckerberg. Please try again.”

Facebook has now addressed the glaring issue, as several users have noted that they can now block the Silicon Valley tycoon.

According to The Independent, those who blocked the Facebook founder received a pop-up message which reads: “Are you sure you want to block Mark Zuckerberg?

Much like other restricted users, Zuckerberg will be unable to see things you post on your timeline, tag you, invite you to events or groups, start a conversation with you and add you as a friend.

“If you’re friends, blocking Mark Zuckerberg will also unfriend him,” the report said.

Furthermore, the message also suggests to “take a break” from Zuckerberg instead through the “unfollow” option, which will result in fewer updates from him, rather than none at all.

Earlier this year, Facebook released a statement regarding Zuckerberg’s status on the social platform and insisted  he is not being given any preferential treatment.

“This error isn’t specific to any one account,” a Facebook spokesperson was quoted as saying in a separate report from The Independent.

“It’s generated when a person has been blocked a certain large number of times. In very rare instances, a viral campaign will develop instructing lots of people to all wrongly block the same person.”

The spokesperson added: “The purpose of this system is to protect the experience for people targeted by these campaigns. We’re constantly working to improve our systems and are taking a closer look at this one.”  Khristian Ibarrola /ra