Scientists hope to inject robo-cat with AI to help seniors 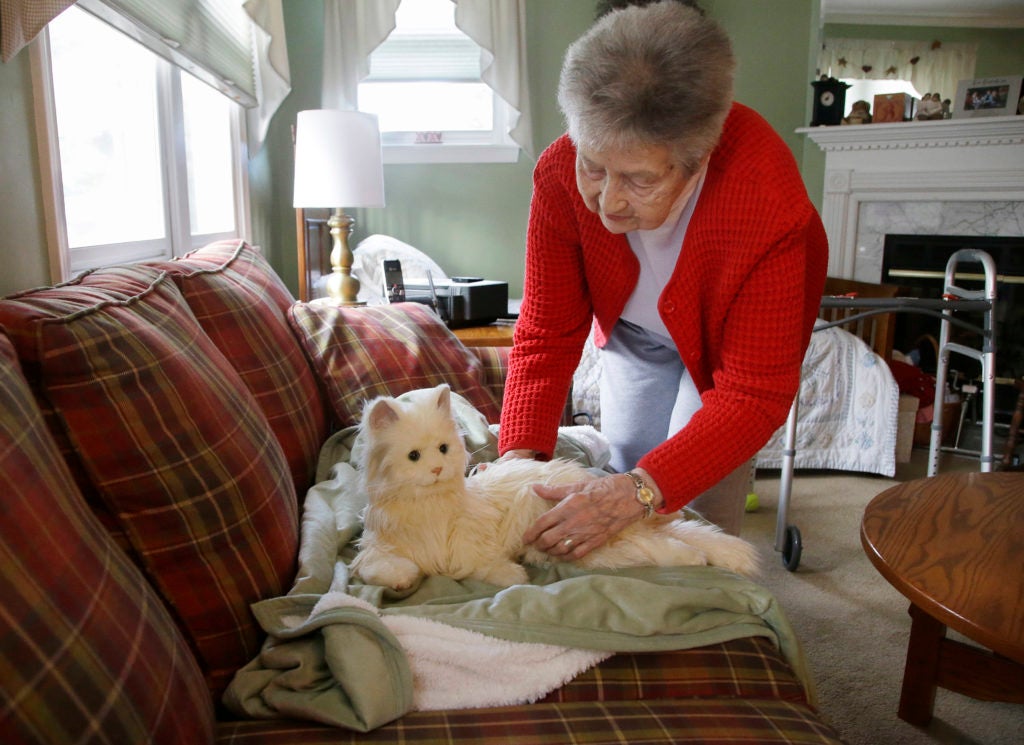 In this Dec. 1, 2017, photo, 93-year-old Mary Derr picks up her robot cat she calls “Buddy”off of the blanket it sits on in her home she shares with her daughter Jeanne Elliott in South Kingstown, R.I. Buddy is a Hasbro’s “Joy for All” robotic cat, aimed at seniors and meant to act as a “companion,” it has been on the market for two years. (AP Photo/Stephan Savoia)

PROVIDENCE, R.I. (AP) — Imagine a cat that can keep a person company, doesn’t need a litter box and can remind an aging relative to take her medicine or help find her eyeglasses.

That’s the vision of toymaker Hasbro and scientists at Brown University, who have received a three-year, $1 million grant from the National Science Foundation to find ways to add artificial intelligence to Hasbro’s “Joy for All” robotic cat .

The cat, which has been on the market for two years, is aimed at seniors and meant to act as a “companion.” It purrs and meows, and even appears to lick its paw and roll over to ask for a belly rub. The Brown-Hasbro project is aimed at developing additional capabilities for the cats to help older adults with simple tasks.

Researchers at Brown’s Humanity-Centered Robotics Initiative are working to determine which tasks make the most sense, and which can help older adults stay in their own homes longer, such as finding lost objects, or reminding the owner to call someone or go to a doctor’s appointment.

Malle said they don’t want to make overblown promises of what the cat can do, something he and his fellow researcher — computer science professor Michael Littman — said they’ve seen in other robots on the market. They hope to make a cat that would perform a small set of tasks very well.

They also want to keep it affordable, just a few hundred dollars. The current version costs $100.

They’ve given the project a name that gets at that idea: Affordable Robotic Intelligence for Elderly Support, or ARIES. The team includes researchers from Brown’s medical school, area hospitals and a designer at the University of Cincinnati.

It’s an idea that has appeal to Jeanne Elliott, whose 93-year-old mother, Mary Derr, lives with her in South Kingstown. Derr has mild dementia and the Joy for All cat Elliott purchased this year has become a true companion for Derr, keeping her company and soothing her while Elliott is at work. Derr treats it like a real cat, even though she knows it has batteries.

“Mom has a tendency to forget things,” she said, adding that a cat reminding her “we don’t have any appointments today, take your meds, be careful when you walk, things like that, be safe, reassuring things, to have that available during the day would be awesome.”

Diane Feeney Mahoney, a professor emerita at MGH Institute of Health Professions School of Nursing, who has studied technology for older people, said the project showed promise because of the team of researchers. She hopes they involve people from the Alzheimer’s community and that “we just don’t want to push technology for technology’s sake.”

She called the cat a tool that could make things easier for someone caring for a person with middle-stage dementia, or to be used in nursing homes where pets are not allowed.

The scientists are embarking on surveys, focus groups and interviews to get a sense of the landscape of everyday living for an older adult. They’re also trying to figure out how the souped-up robo-cats would do those tasks, and then how it would communicate that information. They don’t think they want a talking cat, Littman said.

“Cats don’t generally talk to you,” Littman said, and it might be upsetting if it did.

They’re looking at whether the cat could move its head in a certain way to get across the message it’s trying to communicate, for example.

In the end, they hope that by creating an interaction in which the human is needed, they could even help stem feelings of loneliness, depression and anxiety.

“The cat doesn’t do things on its own. It needs the human, and the human gets something back,” Malle said. “That interaction is a huge step up. Loneliness and uselessness feelings are hugely problematic.” KI