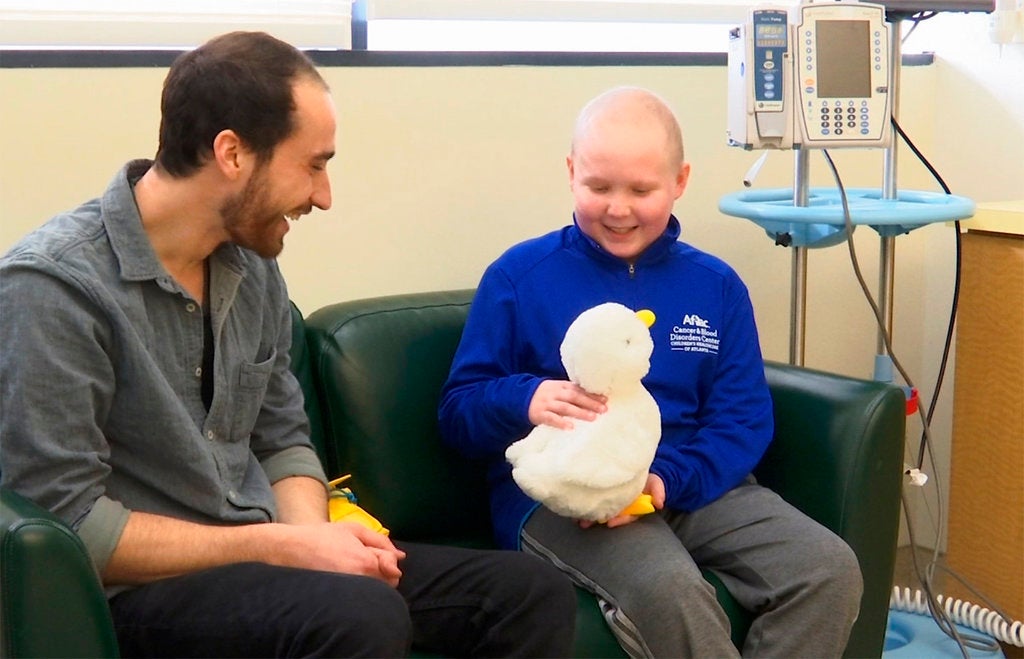 In this undated photo made from video, 12-year-old cancer patient Ethan Daniels at medical facility in Atlanta speaks with Aaron Horowitz, co-founder and CEO of Sproutel, who designed “My Special Aflac Duck” to promote emotional well-being by helping children living with cancer develop a sense of control and manage stress through interactive technology. Image: Marina Hutchinson/AP

TLANTA (AP) — A plush, robotic duck may soon become a fixture in the world of children who have cancer — a social robot that can be silly, happy, angry, scared or sick just like them, and help them cope creatively with their illness through the power of play.

The duck, developed by robotics expert Aaron Horowitz and his company, is undergoing testing and is expected to be widely distributed by the end of this year.

Horowitz said he was diagnosed as a child with human growth development deficiency and had to give himself daily injections for five years. The experience, he said, made him want to help other children with illnesses, which led to his co-founding of the Rhode Island-based company Sproutel with a partner he met at Northwestern University.

Health care facilities from children’s hospitals to nursing homes have been experimenting for more than a decade with the use of robots for social companionship and emotional health. Some devices look like quintessential robots; others are designed as cute animal toys, such as the duck and Paro, a baby seal developed by Japanese researchers to lessen a person’s stress in the same way a real pet might. The machines’ technological sophistication varies, but they have similar aims: improving patients’ psychological well-being, reminding them of health-related tasks or teaching them about health goals.

Horowitz said the first social robot his company launched was Jerry the Bear, an interactive companion for kids with diabetes. Children take care of Jerry by feeding him, giving him insulin and monitoring his blood glucose levels. They also unlock a modular diabetes curriculum geared toward kids.

“Out of this came the idea of, ‘Why can’t we do it for other types of kids?'” Horowitz said.

They turned to kids with cancer — in the U.S., almost 11,000 get such a diagnosis yearly, according to the American Cancer Society. 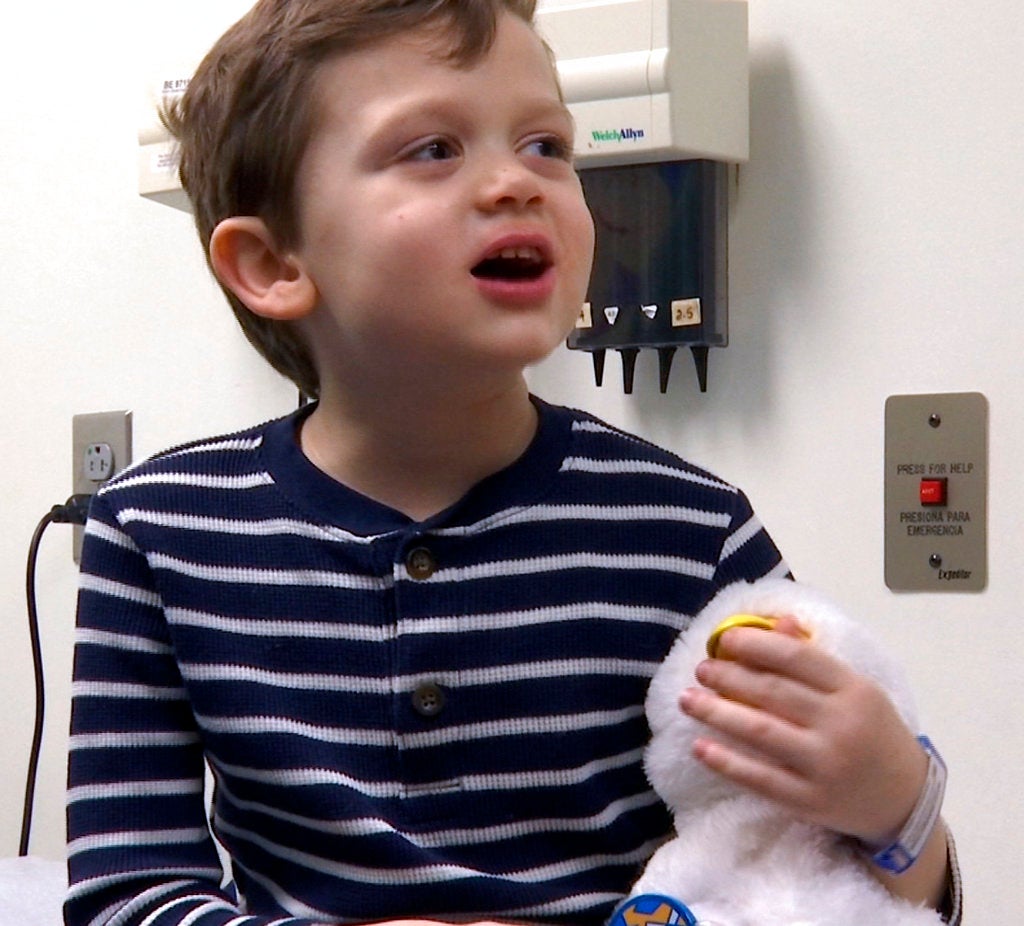 In this undated photo made from video, 5-year-old cancer patient Alex Bridges speaks to a nurse and being comforted by robotic duck just before treatment at medical facility in Atlanta. A plush, robotic duck may soon become a fixture in the world of children who have cancer. The social robot can be silly, happy, angry, scared or sick just like them, and help them cope creatively with their illness through the power of play. Image: Marina Hutchinson/AP

The robot duck is modeled after the mascot for the insurance company Aflac, which paid for its development and is branding the duck with its name. Aflac spokesman Jon Sullivan said the ducks — plush on the outside with sophisticated robotics hidden beneath a washable cover — will be given free to children diagnosed with cancer in the U.S. The duck is expected to be featured Monday at the CES gadget show in Las Vegas. Sullivan said the company intends to continue covering costs of the duck for kids, with no plans for hospitals or insurers to pay for them — unlike Jerry the Bear, which can be purchased directly online.

Aflac and Horowitz said they make no claims the duck has medicinal value — instead, they want the ducks to provide comfort, help them cope with treatment, and distract them from what they’re going through.

The duck can make the soothing sounds of a beach or rainforest and quack tunes. It also does deep-breathing exercises the child can mimic to relax. It has an attachable tube to emulate chemotherapy injections.

Kelli Daniels of Alpharetta, Georgia, said her 12-year-old son, Ethan, has B-cell lymphoblastic lymphoma and must undergo at least three more years of treatment. When he was recently introduced to the duck, his eyes widened. “Awesome,” he said.

He put on the various attachments that help direct the robot and was impressed by how it could sound as if it was in pain. Ethan seemed to connect with the duck’s breathing exercises: He closed his eyes as if in meditation, breathing along.

His mom said that once Ethan receives his own duck, it could help for years.

“It’s a way for Ethan to express himself without actually having to say it, because you don’t want to always say ‘I hurt,'” Kelli Daniels said. “He feels like he hurts all the time.”

Sonia Chernova, an assistant robotics professor at Georgia Tech in Atlanta, said social robots can provide unique support as a child goes through the physical and emotional stress of cancer treatments. A study by MIT researchers who created an interactive robotic teddy bear found that children at a pediatric hospital physically and verbally engaged with it more than they did with a virtual character on a screen or a traditional toy.

“Children interact with robots in a different way than adults,” Chernova said. “For a kid, a robot can be a peer; it is not an adult authority figure.”

Chernova hasn’t seen the duck for children with cancer, and she notes that social robotics is in its infancy. But she cited success with social robots in the education world, and with some in research with autistic children and adults.

“Social robots are not meant to replace your social support network or your social interaction with others, but they are there to also help,” she said. AB