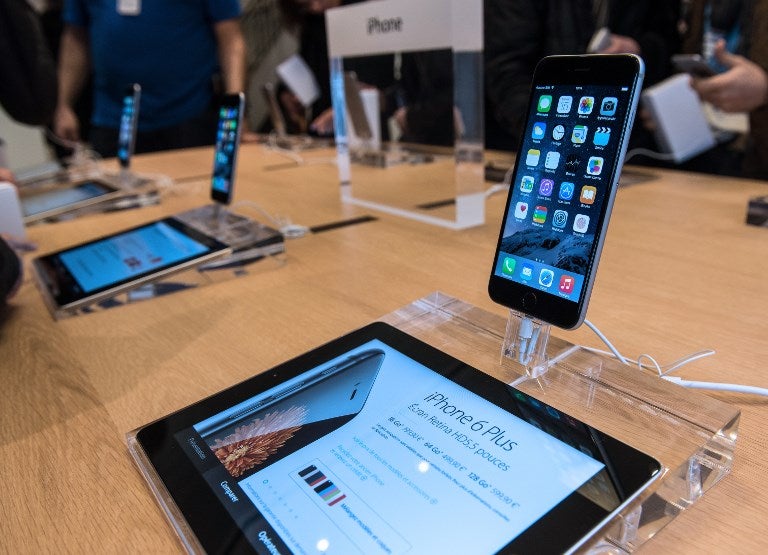 This file photo taken on November 15, 2014, shows shows an iPhone displayed in the new Apple store in Lille, France. Paris prosecutors have launched a probe of US tech giant Apple over suspected “planned obsolescence” in some of its iPhone models, a judicial source said on January 8, 2018. The investigation was opened on January 5 and is being led by anti-trust and consumer protection specialists in the French economy ministry. AFP

PARIS, France — French authorities have opened an investigation into Apple over revelations it secretly slowed down older versions of its iPhones, the Paris prosecutor’s office said Tuesday.

The preliminary probe was opened last week over alleged “deception and planned obsolescence” of some Apple products, the office said. It is led by the French body in charge of fraud control, which is part of the finance ministry.

It follows a legal complaint filed in December by a French consumer rights group whose aim is to stop the intentional obsolescence of goods by companies.

In France it is illegal to intentionally shorten the lifespan of a product in order to encourage customers replace it. A 2015 law makes that a crime, with penalties of up to two years in prison and fines of up to 5 percent of the company’s annual turnover.

Apple apologized in December for secretly slowing down older iPhones, a move it said was necessary to avoid unexpected shutdowns related to battery fatigue. As part of its contrition, Apple is now offering to replace the batteries on older iPhones for $29, a $50 discount from the usual price.

But Apple also has denied the slowdown of the older phones is a ploy designed to spur sales of newer models. “We have never — and would never — do anything to intentionally shorten the life of any Apple product, or degrade the user experience to drive customer upgrades,” the company said on its website.

Apple France didn’t respond to email and phone requests for comment on the latest legal developments in France from The Associated Press.

Lawsuits against the company have also been filed in the U.S. and Israel.

Creative Strategies analyst Carolina Milanesi believes Apple’s throttling of older iPhones is helping to extend the devices’ lives by enabling to take advantage of the new features in the company’s free software updates each year.

The company’s choice boiled down to “let the phone just run at full speed and kill the prematurely aged batteries or slow down the phone so the battery would last longer,” Milanesi wrote in a recent analysis.

The French consumer rights group, called HOP, filed a lawsuit on Dec. 27. Its statement claims Apple slowed down older smartphones in order to make clients buy the new iPhone 8, which was launched on the market around the same time.

Benchmark tests have suggested the slowdown isn’t huge, but noticeable. Although Apple has said that’s done to prevent iPhones from unexpectedly shutting down because of weak batteries, lawsuits filed against Apple say that its failure to disclose that right away could have led some people to wrongly conclude they needed a newer, faster phone rather than just a new battery.

Laetitia Vasseur, the director of HOP, said studies have showed that peaks in speed reductions match the releases of new phones on the market.

“We can see that there is an intention to have people buy new phones because of the speed reduction,” she told the AP.

Vasseur said her group launched a survey following its complaint so that users can report problems they have faced. In 10 days, HOP has received more than 3,000 reports that will be handed over to the DGCCRF, the government fraud watchdog in charge of the investigation, she said.

Vasseur said she hopes that the consequences globally could be to go toward more sustainable and durable products “for all manufacturers that won’t want to face the same kind of scandal.”

The Epson probe, was launched by another prosecutor’s office, in Nanterre outside Paris, is related to some of its ink cartridges and printers’ spare parts. It was the first legal action ever for planned obsolescence and deception in France, HOP said in a statement.

Epson has denied any wrongdoing, saying that planned obsolescence is not part of the company’s policy.

In the French legal system, preliminary investigations are launched and led by prosecutors’ offices. Such probes can last weeks or months. When they’re over, prosecutors can either decide to drop the cases or to send them to investigating judges for full investigations. Judges, in turn, can also dismiss the cases, due to lack of evidence for instance, or send them to courts for trial. In these cases, the whole process may last months or even years.

Since Epson and Apple cases are the first legal actions for planned obsolescence in France, there hasn’t been case law yet on possible penalties, fines or damages awarded by courts under this particular offense.

Any fine imposed on Apple would probably hurt its pride more than its pocketbook. The company has accumulated nearly $270 billion in cash from its sales of iPhones and other products. /cbb