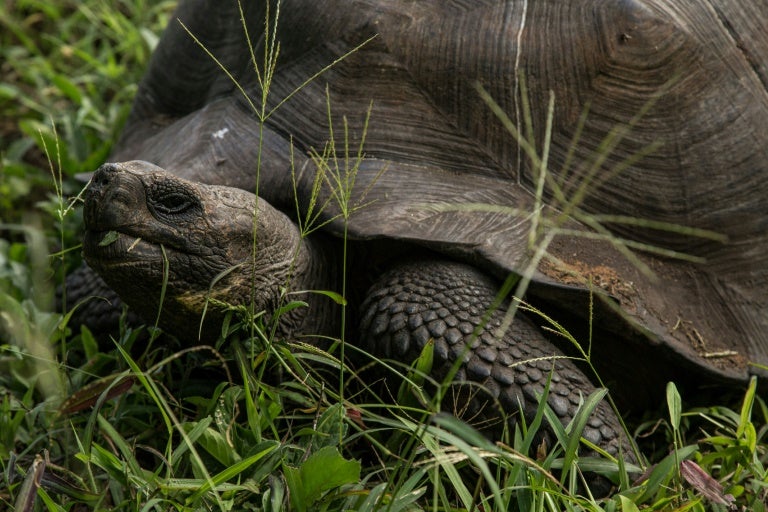 An adult giant tortoise (Chelonoidis Donfaustoi) in the wild on Santa Cruz Island in the Galapagos. Image: Pablo Cozzaglio / AFP

Crowded under a rock in the Galapagos archipelago, the baby tortoises wait for the sun to go down to leave their shelter.

Nothing disturbs these eastern Santa Cruz tortoises (scientific name Chelondis donfaustoi), which were determined just two years ago to be a new species native to the Ecuadoran islands that inspired Charles Darwin.

Kept safe on Santa Cruz island and raised in captivity, their nursery is one of three centers in the archipelago’s national park where 12 species of giant tortoises, unique in the world, are bred.

Stretching their necks and poking their heads out of tiny shells, they nibble on nutritious, starchy leaves of tropical plants brought in from the continent 1,000 kilometers (600 miles) away. Digestion plunges them into afternoon slumber.

“We let them stay a little hungry. That way, when they return to the wild they go looking for their food,” the director of the national park, Walter Bustos, told AFP.

It’s not yet time to let the tortoises go free.

For that, their shells have to be 23 to 25 centimeters (nine to 10 inches) long, meaning around four or five years of age. That’s an insignificant span for these reptiles that can live up to a century and a half, reaching up to two meters (over six feet) long and weighing up to 450 kilograms (1,000 pounds).

The eggs hatched several months earlier in the center, with several broods. In all, the park now has 120 of the eastern Santa Cruz tortoises born in captivity, joining the better-known Galapagos giant tortoise (Chelonoidis nigra) on this string of volcanic islands in the Pacific.

Giant tortoises arrived in the Galapagos around three or four million years ago, and it appears ocean currents likely scattered them across the islands. They developed into 15 species, of which three are extinct, each adapting to its territory.

The tortoise population was decimated by pirates and whale-hunters who captured them for their meat, and who introduced invasive species such as dogs, goats and rats.

The tortoises’ fat, transformed into oil, for a long time fueled street lamps in Ecuador’s capital Quito and the city of Guayaquil on the Pacific coast.

“The tortoises are sorts of engineers in the ecosystem,” Washington Tapia, a biologist at the US-based Galapagos Conservancy, said.

“Through their movements they shape their environment, creating spaces where other species can develop, and they are the best sowers of grain that exist.”

Up until 2002, the scientific community believed all the tortoises on Santa Cruz island, the second biggest in the Galapagos, came from the same species, Chelonoidis porteri.

But after years of genetic studies it was discovered in 2015 that those on the eastern part of the island, on Cerro Fatal (Deadly Hill), were a species apart: Chelonoidis donfaustoi.

There are not many of them, fewer than 400, and the threat of predators prompted park authorities to collect their eggs to hatch them and raise the babies in protective captivity to ensure their survival.

The plan is to release them, once mature, in the same spot where their original nests were found.

Not far from Cerro Fatal, an hour from the main town of Puerto Ayora, park rangers check on adult donfaustoi tortoises as they make their regular patrols.

On one such patrol, they find one tortoise weighing more than 100 kilograms aside a path, in some shrubs.

With no protest, the big reptile allows the rangers to measure its shell and check its health.

“They have genetic and morphological characteristics that set them apart. The donfaustoi is smaller, with a domed shell, while the porteri is more rounded,” explained Danny Rueda, ecosystem director of the park, as he inspected the animal’s feet.

The new species was named in honor of Fausto Llerena, the caretaker of “Lonesome George,” a Pinta Island tortoise on a nearby isle that died three years ago. DNA testing has shown the donfaustoi species to be very close genetically to the species of Lonesome George, of which he was the last.

A little farther along the path, two gigantic male donfaustoi tortoises could be seen battling for territory, using their sturdy shells to butt each other until the vanquished one slowly retreats under the trees. AB