Antenna gets stuck, then overextended during spacewalk 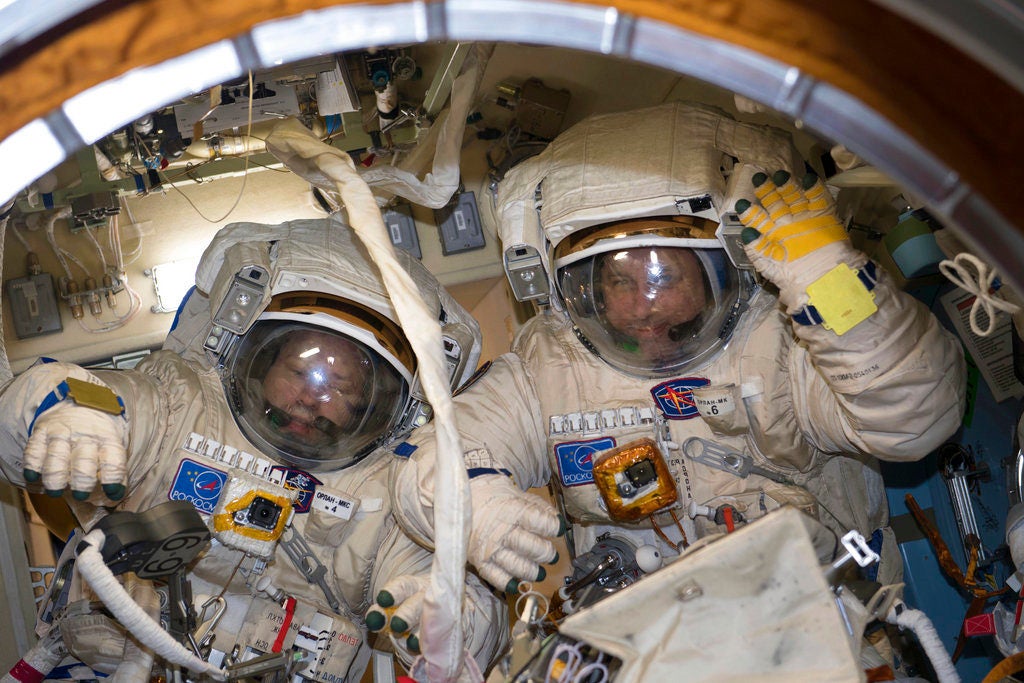 This Jan. 31, 2018 photo made available by NASA shows cosmonauts Alexander Misurkin, left, and Anton Shkaplerov in their Russian Orlan spacesuits during a fit check inside the International Space Station. On Friday, Feb. 2, 2018, the two removed an old electronics box as part of an antenna upgrade at the ISS, then tossed it overboard as a piece of junk. (NASA via AP)

CAPE CANAVERAL, Fla. — A critical Russian antenna outside the International Space Station ended up getting stuck and then extended too far Friday following spacewalking repairs.

NASA’s Mission Control reported that the antenna was still working. Nevertheless, Russian space officials were convening a special team to see whether further action would be necessary. The antenna is used for communications with Russia’s Mission Control outside Moscow.

The trouble arose toward the end of the longer than expected spacewalk, after Commander Alexander Misurkin and Anton Shkaplerov successfully replaced an electronics box as part of the antenna’s upgrade.

The pair watched in dismay as the antenna got hung up on the Russian side of the complex and could not be extended properly. The antenna — a long boom with a 4-foot dish at the end — had been folded up at the beginning of the spacewalk so its electronics package could be replaced.

Misurkin and Shkaplerov pushed, as flight controllers near Moscow tried repeatedly, via remote commanding, to rotate the antenna into the right position. Finally, someone shouted in Russian, “It’s moving. It’s in place.”

By this time, it was seven hours into what should have been a 6 1/2 -hour spacewalk. NASA’s Mission Control said from Houston that the antenna somehow wound up in a position 180 degrees farther than anticipated.

Earlier, Misurkin removed the obsolete electronics box and used both gloved hands to shove it away from the space station. The bundle tumbled harmlessly away, high above the North Atlantic.

“There it goes,” NASA’s Mission Control reported from Houston. The 60-pound box — measuring just a couple of feet, or less than a meter — was hurled in a direction that will not intersect with the space station, according to NASA officials.

Original to the 250-mile-high outpost, the antenna and associated equipment have been up there since 2000.

It was the second spacewalk in as many weeks. On Jan. 23, two U.S. astronauts went out to give a new hand to the station’s big robotic arm. NASA had planned another spacewalk this week, but bumped it to mid-February because engineers needed extra time to get the mechanical hand working.

While the Russians routinely toss old equipment and used towels overboard during spacewalks, NASA prefers to secure no-longer-needed items or, if possible, bring them inside. All but SpaceX’s cargo ships are filled with trash, once emptied of their contents, and set loose to burn up in the atmosphere. The discarded electronics box will re-enter and burn up, too; Mission Control said it did not know when that will occur.

Misurkin will return to Earth at the end of this month with two NASA crewmates.

The space station is home to two Russians, three Americans and one Japanese.