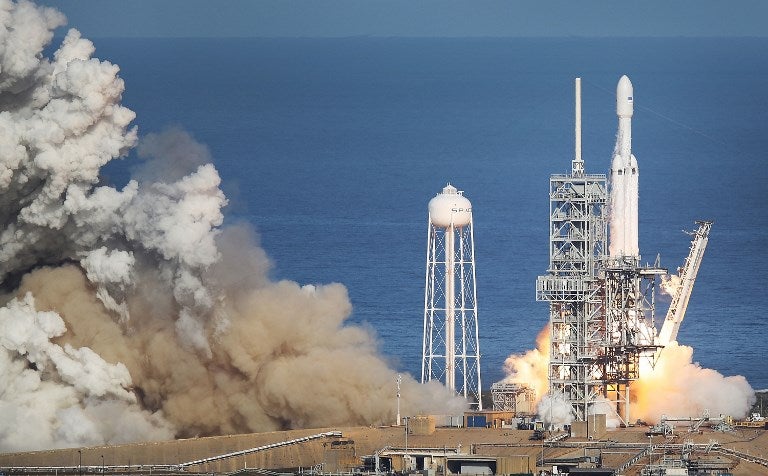 The SpaceX Falcon Heavy rocket lifts off from launch pad 39A at Kennedy Space Center on February 6, 2018, in Cape Canaveral, Florida. The rocket is the most powerful rocket in the world and is carrying a Tesla Roadster toward an orbit near Mars.  AFP

Screams and cheers erupted at Cape Canaveral, Florida as the massive rocket fired its 27 engines and rumbled into the blue sky over the same Nasa launchpad that served as a base for the US missions to Moon four decades ago.

“Wow, did you guys see that? That was awesome,” said SpaceX commentator Lauren Lyons as applause thundered through mission control.

SpaceX commentator John Innsbrucker said it was “everything you could want in a test flight.”

Loaded with Musk’s red Tesla and a mannequin in a spacesuit, the monster rocket’s historic test voyage has captured the world’s imagination.

SpaceX’s webcast showed Musk’s Tesla roadster soaring into space, as David Bowie’s “Space Oddity” played in the background — with the words “DON’T PANIC” visible on the dashboard, in an apparent nod to the sci-fi series the “Hitchhiker’s Guide to the Galaxy.”

Musk posted a video of the car on Twitter after launch, in which he can be heard laughing in the background as a camera behind the mannequin’s head shows the car apparently in orbit around Earth.

He later posted another video showing a “live view of Starman” appearing to cruise, its gloved hand on the wheel, through the darkness of space, the Earth’s image reflected on its glossy red surface.

The car was also outfitted with a high-data storage unit containing Isaac Asimov’s science fiction book series, the Foundation Trilogy, and a plaque bearing the names of 6,000 SpaceX employees.

About two minutes into the flight, the two side boosters peeled away from the center core and made their way back toward Earth for an upright landing.

Both rockets landed side by side in unison on launchpads, live video images showed.

“HUGE congrats to the @SpaceX team on your maiden flight! Another giant step towards making spaceflight for everyone a reality.”

The third, center booster was to attempt a landing on an ocean platform although its status was still unclear. 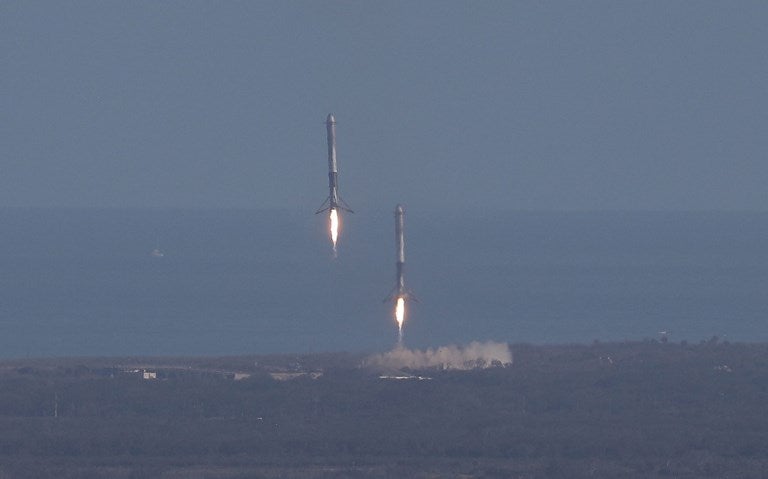 Two of the boosters of Falco Heavy land at Cape Canaveral Air Force Station minutes after the launch from Kennedy Space Center on February 6, 2018, in Cape Canaveral, Florida. AFP

Experts said the launch would likely catch the eye of the US space agency NASA, which may consider using the Falcon Heavy as a way to fast-track its plans to reach the Moon again for the first time since 1972.

Kennedy Space Center Director Bob Cabana said “the successful launch of a new vehicle on its first flight is a significant accomplishment they can be very proud of.”

“What we’re watching is @SpaceX leaving all other rocket companies in the dust. Congrats to everyone there!”

The Falcon Heavy launched from the same NASA pad that was the base for the Apollo-era Moon missions of the 1960s and 1970s.

It is “the most powerful operational rocket in the world by a factor of two,” SpaceX said.

That means it can carry twice the payload of United Launch Alliance’s Delta IV Heavy, at a far lower cost — about $90 million per launch compared to $350 million for its competitor.

But the Falcon Heavy is not the most powerful rocket ever — just the biggest in operation today.

The Saturn V rocket that propelled astronauts to the Moon could deliver more payload to orbit. The Soviet-era Energia, which flew twice in 1987 and 1988, was also more powerful. 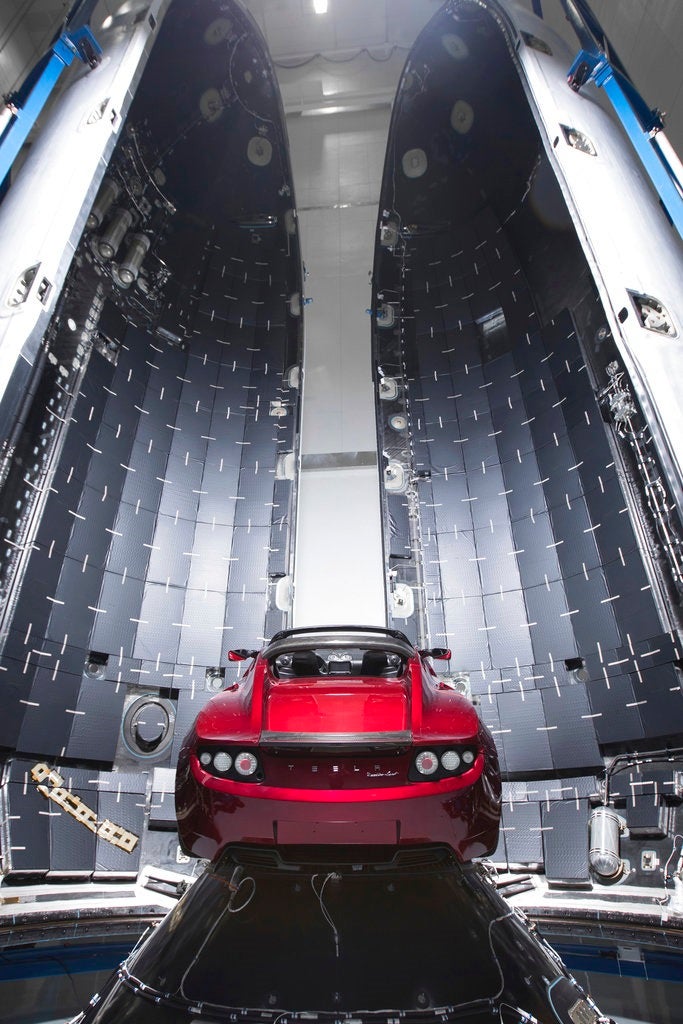 This December 6, 2017 photo made available by SpaceX shows a Tesla car next to the fairing of a Falcon Heavy rocket in Cape Canaveral, Fla. For the Heavy’s inaugural flight, the rocket will carry up Elon Musk’s roadster. In addition to SpaceX, Musk runs the electric car maker Tesla. (SpaceX via AP)

The Falcon Heavy is essentially three smaller, Falcon 9 rockets strapped together, adding up to a total of 27 engines.

It was initially designed to restore the possibility of sending humans to the Moon or Mars, but those plans have shifted and now the Falcon Heavy is being considered mainly as a potential equipment carrier to these deep space destinations, Musk said Monday.

Instead, another rocket and spaceship combination being developed by SpaceX, nicknamed BFR — alternately known as “Big Fucking Rocket,” or “Big Falcon Rocket” — would be the vehicle eventually certified for travelers. /cbb