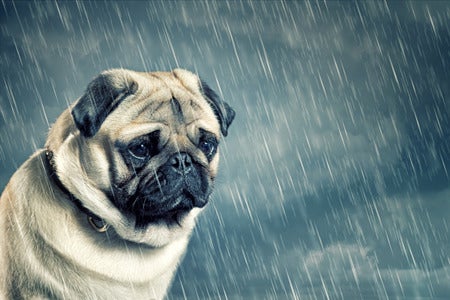 Pet lovers know that their animal friends have special diets, and have a list of food such as chocolate to keep away from their hungry dogs.

However, chicken necks, a treat usually given to small dogs because of the soft meat and smaller bones, are now being tagged as potentially dangerous for pooches.

APN affects the dog’s nervous system and can cause nerve damage. “It is a rare but very debilitating condition where the dog’s hind legs first become weak and then may progress to affect the front legs, neck, head and face,” said Dr. Matthias le Chevoir, chief investigator of the study.

“Most dogs eventually recover without treatment but it may take up to six months or more in some cases,” he said, mentioning that paralysis in the chest can cause dogs to die.

The cause behind the disorder has been unknown until the university’s scientists found the link after studying 27 dogs with symptoms of APN and 47 dogs with none.

They centered on raw chicken meat consumption after some researchers in the team observed that dogs in other countries were not on a raw meat diet.

Those with APN were 9.4 times more likely to have had a Campylobacter infection than the control group. There was also an association between the disease and smaller dogs since they are more likely to be given chicken necks.

“We would recommend that owners choose regular dog food rather than chicken necks until we know more about this debilitating condition.” JB

LOOK: Dogs can now go on a vacation with their owners at Disney World

TOPICS: acute polyradiculoneuritis, Disease, dogs, paralysis, raw chicken
Read Next
Bacteria-killing viruses present in women’s bladders, says study
EDITORS' PICK
LIST: What to expect in areas under GCQ, MGCQ
PNP to maintain checkpoints during GCQ to ensure compliance to health protocols
Notice of 2020 regular meeting of stockholders June 18, 2020
DOTr bares 2 phases of public transport revival in GCQ areas
SM prepares for ‘safe malling’
Leveling up your ‘lutong bahay’ with the kitchen companion you never knew you needed
MOST READ
LIST: What to expect in areas under GCQ, MGCQ
Duterte approves Metro Manila’s shift to GCQ starting June 1
DOH explains: Only 109 of record-high 539 COVID-19 patients were ‘fresh cases’
OFW back in Leyte hometown but tests positive for coronavirus
Don't miss out on the latest news and information.