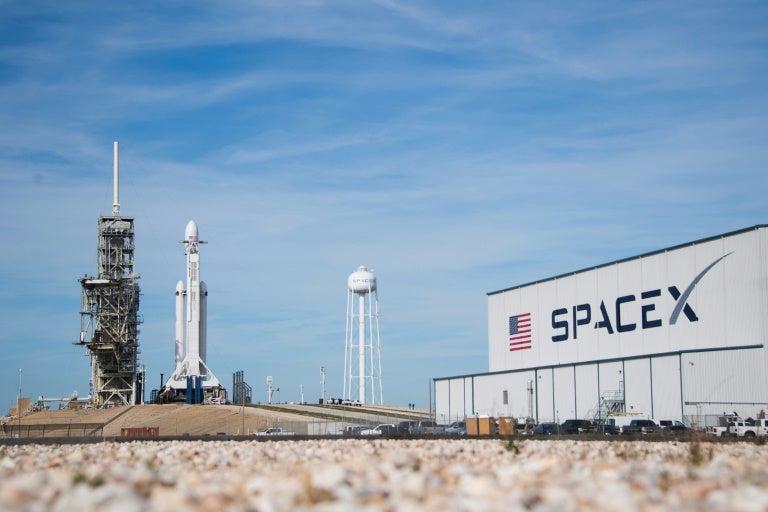 The SpaceX Falcon Heavy — set for launch from Pad 39A at the Kennedy Space Center — is the most powerful rocket in operation today. Image: JIM Watson / AFP

SpaceX chief executive Elon Musk on Tuesday plans to send his own Tesla roadster into space aboard the world’s most powerful rocket in operation, the Falcon Heavy — to the tune of David Bowie’s “Space Oddity.”

Here is a look at some of the other far-out space projects that Musk has cooked up in recent years:

To bring down the cost of spaceflight and boost efficiency, a key goal for Musk is to make rockets as reusable as commercial airplanes — eliminating the current industry practice of tossing the multi-million dollar components after each launch.

After some early crashes and near-misses that prompted SpaceX to showcase them in a blooper reel, the company has now perfected the art of firing the booster’s engines, maneuvering the grid fins and neatly landing the tall portion of the rockets upright on solid ground and on ocean platforms.

Musk is not the only one to have done it — competitor Blue Origin, a rocket company run by Amazon chief Jeff Bezos, has also managed to land its own rockets in a similar fashion.

But no one has done it so many times. SpaceX has landed 21 of its Falcon 9 boosters so far.

Musk wants to make humans an “interplanetary species” by establishing a colony of people living on the Mars.

Riding on reusable rockets and spaceships — still under development — people could travel 100 at a time to the Red Planet.

The idea is to bring up to a million people to Mars in the next century. Test flights could start in the next decade.

The cost to develop the rocket and spacecraft is estimated at $10 billion. 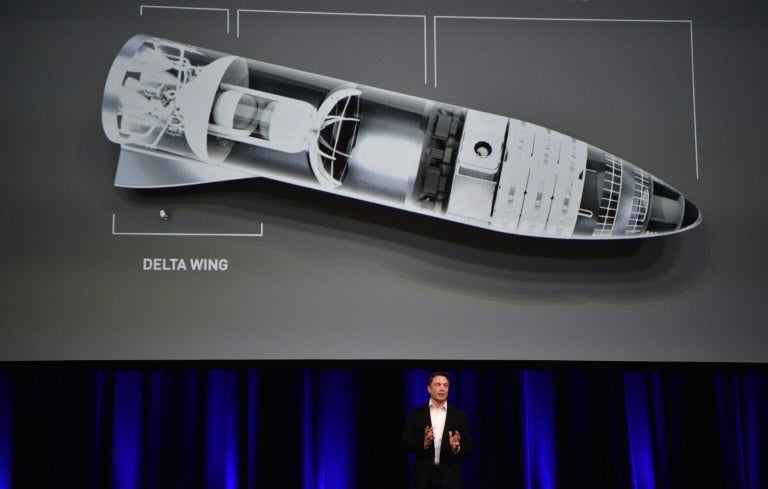 SpaceX is calling the rocket that would carry all these people to Mars “BFR,” which Musk has jokingly — or not — referred to as code for “Big Fucking Rocket.”

According to Spacenews.com, its formal name is now understood to be “Big Falcon Rocket.”

The idea is to have one booster and ship that replaces three of SpaceX’s signature projects: the Falcon Heavy which aims to be the world’s most powerful rocket for now, and may one day ferry supplies to Mars; the versatile Falcon 9 rocket, which can land seamlessly back on Earth post-launch; and the Dragon cargo ship which supplies the International Space Station.

The first cargo shipments could make it to Mars in 2022, SpaceX has said.

New York to Shanghai via rocket in 39 minutes? It’s all part of Musk’s vision for rocket travel on Earth.

The BFR will be the vehicle, Musk has vowed, to fly to most places on Earth in under 30 minutes and anywhere in under an hour.

The cost per seat would be about the same as an airplane economy fare, he said.

– Cargo and crew to space –

It seems like old news now, but SpaceX made history in 2010 by becoming the first private company to send its own spaceship to orbit and recover it.

That same year, SpaceX began regular cargo missions to supply the astronauts living in space with its gumdrop-shaped Dragon cargo ship, launched atop the Falcon 9 rocket, under a $1.6 billion contract with NASA.

Orbital ATK also sends its unmanned Cygnus cargo carrier to the ISS under a $1.9 billion deal with NASA.

SpaceX’s Dragon is the only ship that can be returned to Earth intact. The Cygnus burns up on re-entry to Earth’s atmosphere.

SpaceX is developing a crew Dragon vehicle that will be able to transport several astronauts at a time to the space lab. Its first manned flight could come later this year. AB