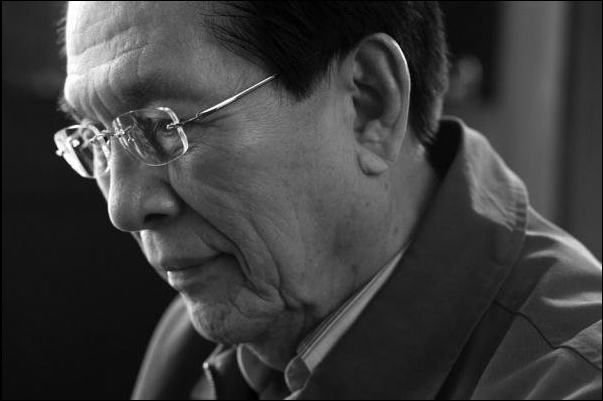 For thousands of years, the quest for immortality has been an underlying and recurring theme among men. It’s a Herculean task that has pervaded both the realms of mythology and real life — from Gilgamesh’s sorry fate in the well of water, to embryonic harvesting and cell regeneration made in the name of science. There are far too few people in the history of mankind who can say they’ve reached the age of 90, and much fewer still to reach the age of 94. Jesus Christ isn’t one of them, nor are Alexander the Great and Mahatma Gandhi, who all died young in their years.

But for Juan Ponce Enrile Sr., turning 94 is just another milestone to tuck under his belt. The former Senate president hit the big 9-4 today, making Feb. 14 not just a celebration of hearts, but also the celebration of his special birthday. Reaching 94 is indeed a mean feat, and netizens, too, were quick to point out the longevity of Enrile’s life.

Days leading to Enrile’s birthday, netizen JR Castillo (@JRDCastillo) took to Twitter and listed down all the things in history that Enrile is older than. 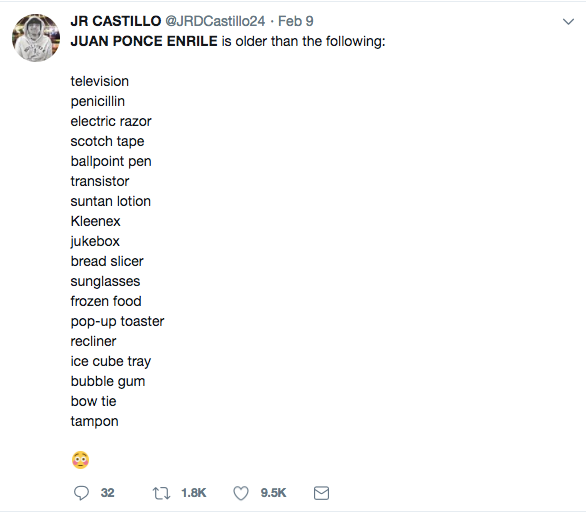 Louise (@louisemelodine), another Twitter user, pointed out that Enrile is older than the cheeseburger, which was invented two years after his birth. JR Castillo again shared another fact, saying the dwarf planet Pluto was discovered six years after Enrile was born.

Meanwhile, @rvrntyza tried to guess the secret behind Enrile’s diet.

“Ano kayang diet niya? (I wonder what his diet is.) A cup of soup made from the blood of virgins. A side of the souls of unborn children. Two servings of the flesh of the innocent,” she wrote. “And his exercise probably consists of seven shots of stem cell treatment.”

Meanwhile, @SuperSailorMai wondered out loud, too, that perhaps Enrile’s immortality is due to all the cans of Delimondo corned beef sold, with each purchase adding one hour to his life span, since his family owns Delimondo.

Editors of Manila (@edsMNL), on the other hand, wished Enrile a happy birthday, adding a Bible passage in the end that said, “Remember that you are dust, and to dust you shall return.”

Journalist Dino Maragay (@dino_mars) also joined in on the fun, greeting Enrile a happy birthday and telling him he will never forget reading about how Enrile crossed the Red Sea with Moses.

But really, what could be Enrile’s secret to a long life? Is it St. Germain’s Elixir of Life, or a superhuman gene? A plate of pancit everyday for breakfast? A monthly nine-day novena? Perhaps we’ll never know. JB