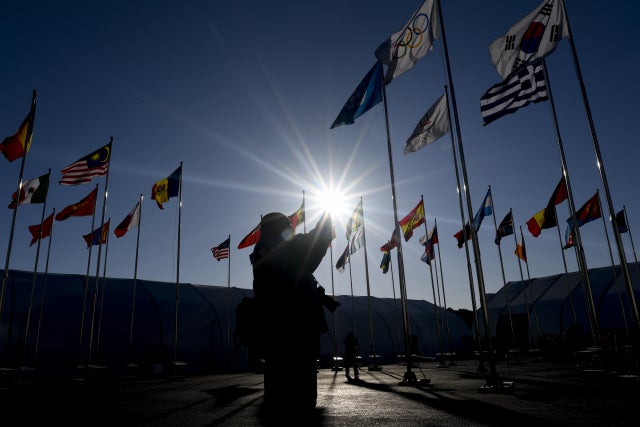 Tinder says it has made its usually paid-for Tinder Gold upgrade free to athletes and users in the Olympic Village for the duration of the Games. Image: WANG Zhao / AFP

The Pyeongchang Winter Olympics are freezing cold but they might just be the hottest dating spot on the planet right now — no wonder organizers dished out a record 110,000 condoms.

Competitors and support staff have put their profiles on dating/hook-up app Tinder, along with visiting journalists and many others in South Korea for the Olympics.

After the closing ceremony on the last night of the Olympics is notoriously the time when the nearly 3,000 competitors — most of them young and in prime physical condition — are particularly eager to celebrate.

Organizers did not want to be caught with their trousers down and handed out the equivalent of 38 condoms per competitor, the largest number of free condoms given out at a Winter Games.

Rubber manufacturer Convenience Co. donated most of the condoms, and a spokesman said coyly in the lead-up to the Olympics: “We don’t expect the athletes to use them all.”

Skeptics may say they should be concentrating more on winning medals, but with time to kill between their events, some male and female competitors appear to have gone looking for a match on Tinder.

Alysia, 29, says on her profile: “Just your basic Canadian chick who spends the winter travelling the world racing my toboggan.

“I work hard but play even harder.”

She adds: “I’m in Korea for a couple of weeks for what some people would say is a pretty important race, and I couldn’t be more excited to be here.”

An American speed skater is also among the athletes on Tinder, but several other competitors appear to have taken down their profiles after news spread that Olympic competitors were using the app.

Pyeongchang, something of a backwater hardly famed for being a dating hotspot, suddenly finds itself just that.

One Tinder user, going by the name Beulah, aged 32, wrote on her profile: “Yahoo says Tinder is super blowing up in Pyeongchang right now so I added the app because what do you think…

“I’m also fun and stuff and could go for a drink and watch some curling.”

Tinder confirms there has been a massive surge in use in the Pyeongchang area.

The matchmaker, launched in 2012, says it has made its usually paid-for Tinder Gold upgrade free to athletes and users in the Olympic Village for the duration of the Games.

And it cites data saying that Americans are the top users of its “Passport” feature, which allows them to match with people in the Olympic athletes’ village, even if they themselves are back in the US.

The timing of all this seems particularly apt with Valentine’s Day approaching on Wednesday. Even US ski “queen” Lindsey Vonn, who dated golf former number one Tiger Woods for more than two years, is on the lookout.

The 33-year-old revealed in Pyeongchang that she turns to top male Norwegian skiers Aksel Lund Svindal and Kjetil Jansrud for dating advice.

“Hopefully they can find me a guy now,” she said soon after arriving at the Games, before quickly adding: “Just kidding.