LOS ANGELES — Fans of the clean, inviting look of the iPhone, iPad and other blockbuster Apple products are legion, and that includes Queen Elizabeth II. 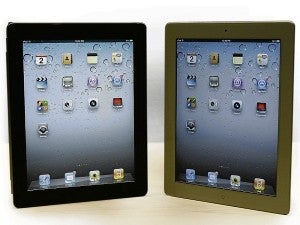 The British monarch has awarded a knighthood to Jonathan Paul Ive, a British citizen and head of Apple Inc.’s design team since the mid-’90s.

Ive received a KBE, short for Knight Commander of the Most Excellent Order of the British Empire. The honor was announced Saturday for services to design and enterprise.

“To be recognized with this honor is absolutely thrilling and I am both humbled and sincerely grateful,” Ive said in a statement. “I discovered at an early age that all I’ve ever wanted to do is design. I feel enormously fortunate that I continue to be able to design and make products with a truly remarkable group of people here at Apple.”

Ive is credited with helping the late Steve Jobs bring the consumer-electronics company back from the brink of financial ruin in the late 1990s with his whimsical design for the iMac computer, which originally came in bright colors at a time bland shades dominated the PC world.

He later helped transform Apple into a consumer-electronics powerhouse and the envy of Silicon Valley with his designs for the iPod, the iPhone and, most recently, the iPad.

The knighthood is the second royal honor Ive has received. He was awarded a Commander of the British Empire honor in 2006 for achievements in British design and innovation.

Britain’s honors are bestowed twice a year by the monarch — at New Year’s and on her official birthday in June. Recipients are selected by committees of civil servants from nominations made by the government and the public.

Most of the honors go to people who are not in the limelight, for services to community or industry, but they also reward a sprinkling of famous faces.

Oscar-nominated actress Helena Bonham Carter and music producer Steve Lillywhite were among those included with Ive in the queen’s New Year honors list for 2012.

Ive started out far from Apple Inc.’s Cupertino, California, headquarters. He grew up outside London and studied design at Newcastle Polytechnic (now Northumbria University) in Newcastle, England. After finishing school, he co-founded a London-based design company called Tangerine. There, he designed a range of products including combs and power tools. It was through Tangerine that he first got to work with Apple.

In 1992, while Jobs was still in the midst of a 12-year exile from Apple, Ive was hired as a senior designer.

After Jobs returned, he and Ive worked closely, ushering in products that are sleek and stylish, with rounded corners, few buttons, brushed aluminum surfaces and plenty of slick glass.

Apple’s pride in this work is evident even in the packaging: Open up any iPhone box, for example, and see Apple proudly proclaim, “Designed by Apple in California.” Six of Ive’s works, including the original iPod, are part of the collection at the Museum of Modern Art in New York.

Design, as well as software that makes the gadgets easy to use, is a crucial part of setting Apple products apart from those of its rivals. Apple didn’t make the first music player or smartphone, but it dominated the market by making ones that looked cool and worked well.

Now, Apple’s products are more popular than ever, vaulting it past rival Microsoft Corp. in 2010 as the most valuable technology company in the world.

TOPICS: Apple, design, Information and Technology, Ipad, iPhone, iPod, Jonathan Paul Ive, Knight Commander of the Most Excellent Order of the British Empire, knighthood, News
Read Next
Cops act to stop website hackers
EDITORS' PICK
Garcia softens stance, meets IATF halfway on swab-upon-arrival policy
Want to help local farmers? Shop small and eat Real Food
ICC is everything but a court of ‘white people’
Manila is 78th most expensive city in the world for foreign workers
TeaM Energy pushes development programs to help in pandemic rebound
Piolo Pascual: The Ultimate Heartthrob continues to level up
MOST READ
Sharon Cuneta on living in the US: ‘Nagagawa ko lahat ng normal na bagay’
Mike Nieto asks fans: ‘No below the belt remarks’ toward South Korea
Duterte-Duterte tandem possible but ‘winnability is another question’ — Binay
ICC is everything but a court of ‘white people’
Don't miss out on the latest news and information.