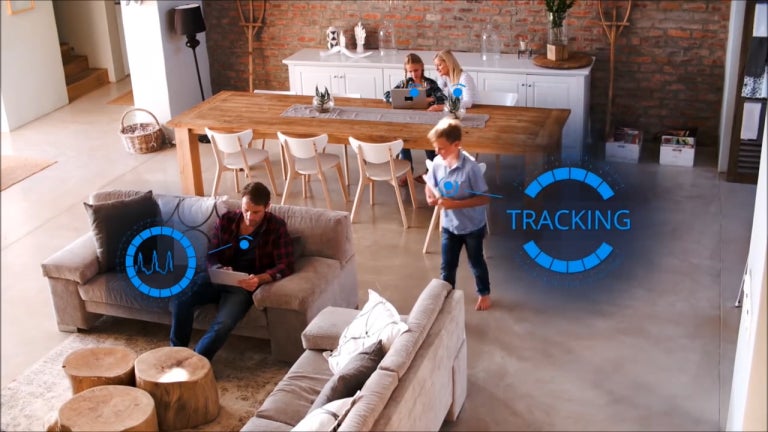 Israeli 3D imaging company Vayyar presented a new sensor that uses radio waves to map where people are in a room. Image: Courtesy of Vayyar / AFP

Looking after an elderly relative who lives alone can be a huge source of worry.

But what if your smartphone could automatically alert you if your mother has stayed in bed all morning or suffered a fall?

Small sensors that monitor home activity and can send alerts to smartphones are marking it easier to keep an eye on seniors from a distance, helping them to live independently for longer instead of going to a nursing home.

The products on display at the Mobile World Congress, the world’s largest mobile phone fair in Barcelona, are part of the rapidly growing elderly care tech industry.

This is expected to be worth $20 billion (16 billion euros) in the United States alone by 2020, according to Laurie Orlov, an industry analyst.

“For the past couple of years the tech industry has become more interested in this area because they see an aging population. Baby boomers represent a large market segment,” said Orlov, who began the Aging in Place Technology Watch blog in 2008.

Sensors have also come down in price, making their commercial use for home monitoring of seniors more viable, she added.

London-based startup Voltaware unveiled a system that uses a sensor installed in the home’s main fuse box, which transmits data on electricity consumption via Wi-fi to a cloud-based server where it is analyzed.

If a senior does not get up in the morning and turn on the coffee machine as usual, the system detects the lack of activity and the person’s carer is warned by text message.

The service is being offered on a trial basis by two electrical companies in Britain and one in Italy.

“With cameras you would need several to see the whole picture, so it is expensive. Our stuff is very inexpensive because it’s just one per household,” said Voltaware chairman Sergey Ogorodnov.

Israeli 3D imaging company Vayyar presented a new sensor that uses radio waves to map where people are in a room.

It can also tell if they are sitting, standing, or laying down — and if they are breathing.

If somebody stops breathing or has fallen down, their caregiver is sent a text alert.

Only a single sensor placed in a central location is needed because it relies on radio waves, which can “see” through walls to detect what is happening in other rooms.

Concerns have been raised that home monitoring systems can violate privacy but the sensor makers argue that in most cases it is the elderly themselves who request the system — and they can turn it off when they want.

Also, sensors do not record images like camera based monitoring systems so they are better suited to personal spaces like bathrooms, said Vayyar director of marketing Malcolm Berman.

“Sensors enable you to do really sophisticated monitoring without any of those privacy concerns,” he said.

The need for tech products that help seniors stay at home longer is expected to grow sharply, given the the world’s ageing population.

Globally, the number of people aged 60 or more is predicted to more than triple to 3.1 billion by 2100, according to United Nations estimates.

Swedish telecoms firm Doro, the market leader in easy-to-use mobile devices for seniors, unveiled a sensors-based home monitoring system for the elderly which can send a text warning that they have fallen or even left the fridge open.

Doro president Robert Puskaric said the launch of the “SmartCare” service was “an important strategic move” for the company, which aims to cater to the growing number of seniors who live alone.

Sensors may soon be used to predict when a senior is about to suffer a fall.

Canadian start-up Aerial has patented a system that monitors human behavior in a home by tracking disturbances to the wi-fi signal when a person moves.

The information is then made available on an easy to read app, allowing relatives to check if an elderly family member has gotten up for example.

The company is working on a more advanced version that warns when a senior is at risk of falling by detecting sudden changes in their walking speed or gait.

“There is a strong desire to have seniors live at home as long as they can. Any type of independence they can maintain is great,” said Aerial project manager Jon Druker. AB

AI and 5G in focus at top mobile fair