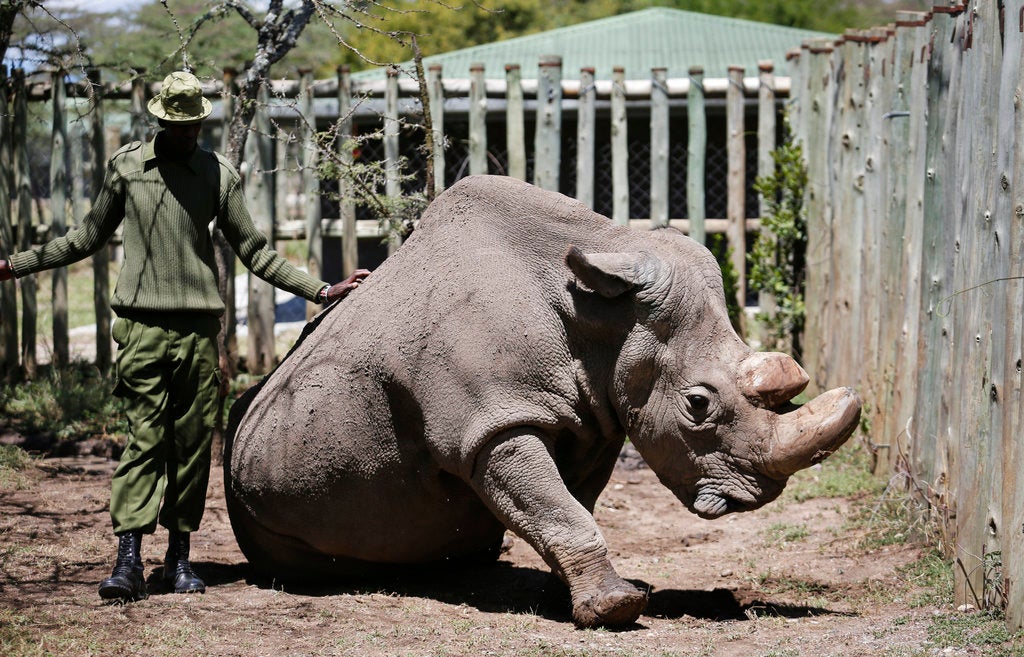 In this photo taken Wednesday, May 3, 2017, a ranger takes care of Sudan, the world’s last male northern white rhino, at the Ol Pejeta Conservancy in Laikipia county in Kenya. The health of 45-year old Sudan is deteriorating and his minders said Thursday, March 1, 2018, that his “future is not looking bright.” Image: AP

JOHANNESBURG (AP) — Old and sick, the world’s last male northern white rhino has surprised his keepers by getting up and walking around at a wildlife area in Kenya.

The 45-year-old rhino named Sudan moved during the night and took a “delicious mud bath” after long-awaited rains fell, the Ol Pejeta Conservancy said Saturday on Twitter. It noted that March 3 is U.N. World Wildlife Day and that it had received many messages of concern for the ailing Sudan, who could be euthanized if he continues to suffer from a deep infection on his back right leg.

“He is now resting again and will be attended by the vet team and his keepers throughout the day,” said the conservancy, which is also home to the last two female northern white rhinos – Sudan’s daughter and granddaughter.

While the rhino subspecies is on the verge of extinction because of poaching, scientists hope to use southern white rhinos as surrogates to carry northern white rhino embryos and give birth. The in vitro process would be conducted using sperm from dead rhinos that is stored in Berlin and eggs extracted by surgery from the females at Ol Pejeta, according to the conservancy.

Some conservationists believe the scientific project stands little chance of rebuilding a viable population of northern white rhinos and say funding and resources should be directed to saving imperiled species with a much better chance of recovery. They refer to Asia’s Sumatran and Javan rhinos, with fewer than 100 of each species remaining.

There are roughly 20,000 southern white rhinos in Africa. Their numbers dipped below 100 around a century ago, but an intense effort initiated by South African conservationist Ian Player in the mid-20th century turned things around. Even so, the southern white rhino and another species, the black rhino, are under heavy pressure from poachers who kill them for their horns to supply illegal markets in parts of Asia.

Northern white rhinos once roamed parts of Chad, Sudan, Uganda, Congo and Central African Republic, and were particularly vulnerable because of the armed conflicts that have swept the region over decades.

“They had the bad luck to be living in war zones,” said Jo Shaw, African rhino expert for the WWF conservation group. AB

What does a bear do in the Alaska woods? Disperse seeds