Chikka shutting down after two decades of free texting service

In a time before smartphones ruled our lives, the Philippines was considered the texting capital of the world, and Chikka was one of the forces that helped establish this.

But all good things come to an end. The company behind Chikka has declared it will be closing shop by the end of March. 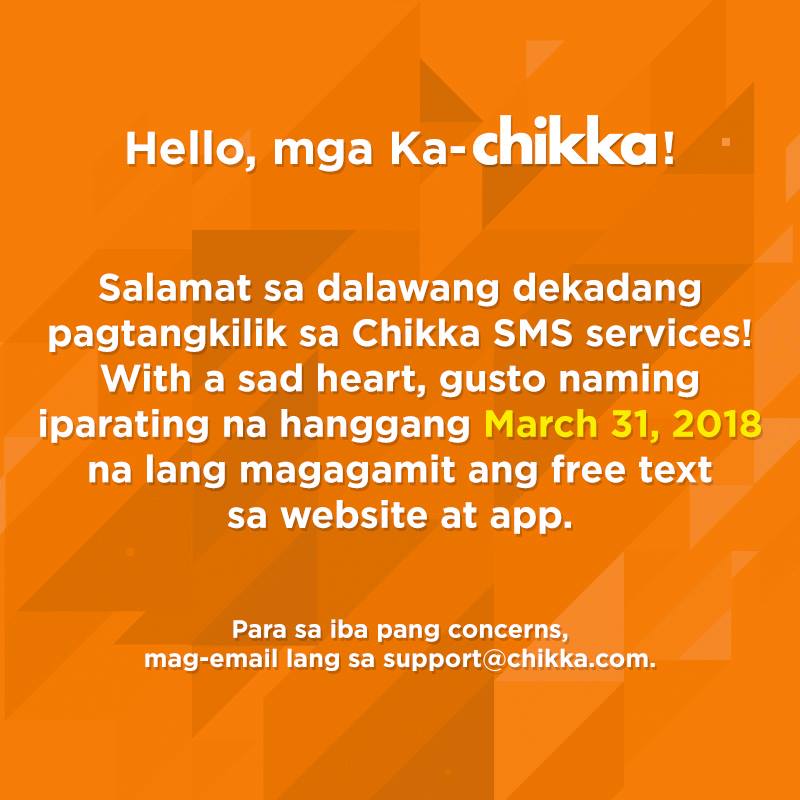 Long time users of the service offered their thanks and shared fond memories of being able to reach out to loved ones despite limitations on their budget, through Chikka.

“Many thanks chikka! Since college you’ve helped me reply to texts whenever I ran out of pre-paid load.” Image: Facebook/@ChikkaPhilippines

Some netizens lamented that there’s a reason now to top up their pre-paid cell service.

More than being just a means to reach out, it appears Chikka also helped to facilitate a lot of romances during its time. Fans of the service humorously reminisced about using Chikka to reply to former suitors-turned-husbands, and even girlfriends.

“Thanks Chikka. Because of you I could always reply to my abnormal husband and collect payments from people.” Image: Facebook/@ChikkaPhilippines

“Thank You Chikka. You always saved me whenever I couldn’t text my girlfriend because I ran out of load. If not for you, I would have suffered from countless broken bones, bruises and other forms of violence. Thank you.” Image: Facebook/@ChikkaPhilippines

But one netizen may have summed up everyone’s sentiments, through a hugot.

“Everything we love goes away.” Image: Facebook/@ChikkaPhilippines

Chikka began as a small program for Windows PCs which allowed users to send text messages for free. While recipients would be charged for replying, the ability to send texts at zero cost still proved useful for thrifty Filipinos. This is especially true when sending group texts.