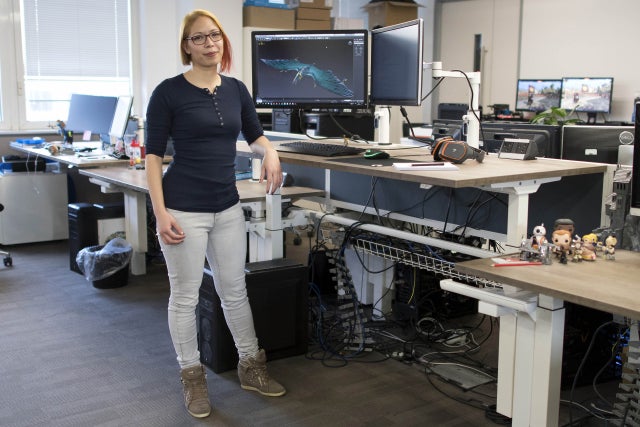 Giving life to a black elf in a fantasy video game, softly spoken schoolgirl Hannah leans into the microphone to deliver an ominous warning: “This world, and everything in it, will burn!”

With seven other schoolgirls, the 13-year-old is learning the tricks of the gamer trade as part of an initiative to encourage more girls to enter the industry.

For the past three years Creative Assembly, one of Britain’s largest video game developers, has hosted girl-only workshops at its offices in Horsham, South London.

“We want to address these misconceptions such as ‘it’s easier for men to find jobs than it is for women in this industry’ and ‘my mom tells me to get a real job.'”

With her rectangular glasses and red highlights, Azhar knows as a young female that she is an exception in Britain’s video game industry.

According to a 2016 study, women fill only 19 percent of jobs, despite the fact that women make up half of British gamers.

“In that 19 percent, how many of those women are actually making games?” asked Marie Claire Isaaman, president of the “Women in Games” group, which seeks to increase female representation.

“If I look to a range of other data, most women aren’t making games,” she added. “So you have all male team(s) developing female characters. That can be a big problem.”

For Azhar, this shortage is primarily linked to education.

“I think the biggest issue with women getting in the industry comes from a school age,” she told AFP.

“Although I loved playing video games, I didn’t realize that making them could be a professional career. At school, I never got told about theses jobs.”

Much of the disparity can be traced back to a supply shortage, with fewer girls choosing to study STEM (Science, Technology, Engineering and Mathematics) subjects, according to Richard Wilson, head of the Independent Video Game Developers’ Association in the UK.

Studios “can actively go out and try to encourage more women to get a career in the video games industry,” he suggested.

Part of the imbalance has also been ascribed to negative attitudes within the video game world, claims that boiled over in 2014 with the so-called “Gamergate” incident.

The row centered on accusations that journalists were artificially boosting games created by female developers, but soon took a dark turn with death and rape threats leveled against independent developer Zoe Quinn.

On the flip side, studios now appear less hesitant to cast women as main characters, such as in recent releases “Horizon: Zero Dawn” and “Uncharted: The Lost Legacy”.

The country boasts some of the industry’s most prestigious names, such as the Rockstar North studio in Scotland, creator of the “Grand Theft Auto” series, and London’s Rocksteady.

“Things are going in the right direction,” said Isaaman, who hopes that 40 percent of the industry will be female by 2025.

Not surprisingly, Britain is seeking to be at the forefront of the global debate.

After all, it was near Derby in central England in 1996 that now-defunct studio Core Design gave birth to Lara Croft, one of the most iconic gamer characters of all time. AB