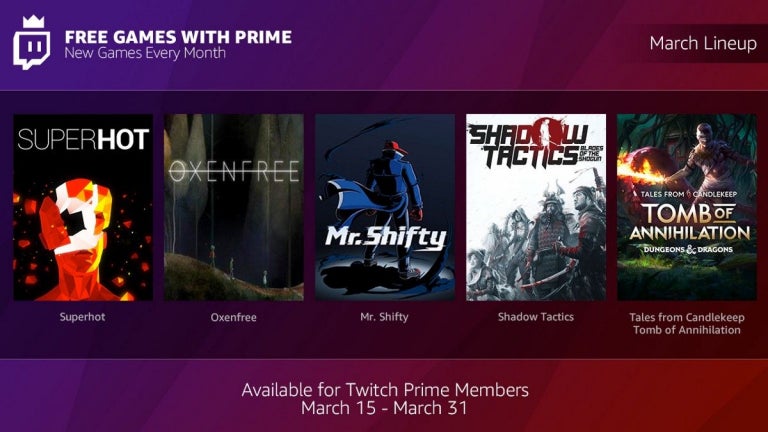 Game-oriented video streaming service Twitch TV appears to be taking on both Steam and the Humble Store in one fell swoop.

A free monthly games bundle for premium-tier members is positioning streaming service Twitch TV as not only a challenger to YouTube but also Steam and Humble as well.

Free Games with Prime applies to members of Amazon’s group-wide Amazon Prime service, branded as Twitch Prime where Twitch TV is concerned, and begins with a half-month debut on March 15.

Twitch has been giving away individual games and add-ons on a monthly basis but this program expands the offer and further establishes Twitch as not just a video platform but also a games distribution service in its own right.

Crucially, Amazon’s Twitch is expected to maintain its policy of having games launch through its Twitch Desktop App, rather than through another service, such as the sector’s dominant retail and networking service, Steam.

The promise of free monthly games and Twitch’s own status within the gaming community together encourages PC gaming enthusiasts to lessen dependence, voluntary or otherwise, on Steam.

By launching a monthly subscribers’ bundle, Amazon is also moving into the same space as the Humble Store, an authorized Steam key reseller which established itself on a pay-what-you-want sales model before debuting its Humble Monthly blind-buy scheme in 2015.

But in another key difference for Free Games with Prime, Twitch is announcing its games in advance.

PlayStation responds to ‘Sea of Thieves’ with 14-game salvo