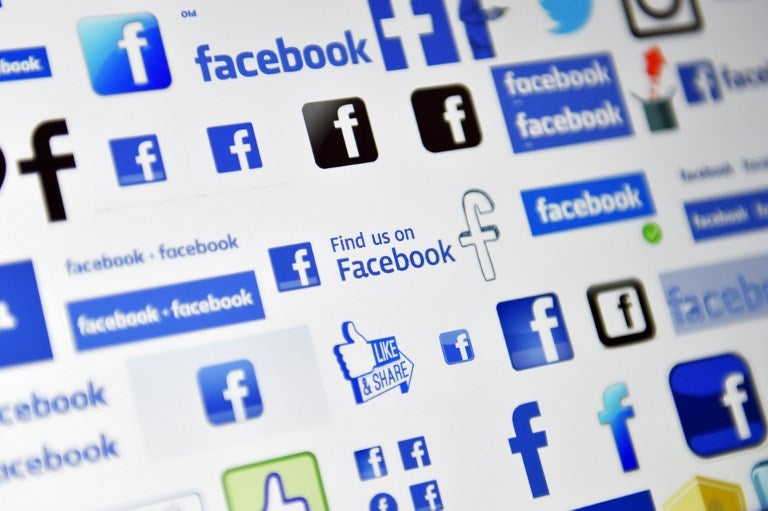 This file photo taken on December 28, 2016, shows logos of US online social media and social networking service Facebook.
Facebook says it has suspended the account of Cambridge Analytica, the data analysis firm hired by Donald Trump’s 2016 presidential campaign, after reports it harvested the profile information of millions of US voters without their permission. AFP

WASHINGTON, United States — Facebook shares plunged Monday as the social media giant faced an onslaught of criticism at home and abroad over revelations that a firm working for Donald Trump’s presidential campaign harvested and misused data on 50 million members.

Calls for investigations came on both sides of the Atlantic after Facebook responded to the explosive reports of misuse of its data by suspending the account of Cambridge Analytica, a British firm hired by Trump’s 2016 campaign.

Democratic Senator Amy Klobuchar and Republican John Kennedy called for Facebook chief Mark Zuckerberg to appear before Congress, along with the CEOs of Google and Twitter.

The two lawmakers said the companies “have amassed unprecedented amounts of personal data” and that the lack of oversight “raises concerns about the integrity of American elections as well as privacy rights.”

Senator Ron Wyden asked Facebook to provide more information on what he called a “troubling” misuse of private data that could have been used to sway voters.

Wyden said he wants to know how Cambridge Analytica used Facebook tools “to weaponize detailed psychological profiles against tens of millions of Americans.”

Vera Jourova, the European commissioner for justice, consumers and gender equality, called the revelations “horrifying, if confirmed,” and vowed to address concerns in the United States this week.

“We have repeatedly asked Facebook about how companies acquire and hold on to user data from their site, and in particular whether data had been taken from people without their consent,” Collins said in a statement.

“Their answers have consistently understated this risk, and have also been misleading to the committee.”

On Wall Street, Facebook shares skidded 6.8 percent amid concerns about pressure for new regulations that could hurt its business model.

Brian Wieser at Pivotal Research said the revelations highlight “systemic problems at Facebook,” but that they won’t immediately impact the social network’s revenues.

Still, he said, “risks are now enhanced” because of the potential for regulations on how Facebook uses data for advertising and monitoring users.

According to a joint investigation by The New York Times and Britain’s Observer, Cambridge Analytica was able to create psychological profiles on 50 million Facebook users through the use of a personality prediction app that was downloaded by 270,000 people, but also scooped up data from friends.

Facebook said it had hired a digital forensics firm to examine how the data leak occurred and to ensure that any data collected had been destroyed.

“If this data still exists, it would be a grave violation of Facebook’s policies,” the statement said.

Jennifer Grygiel, a Syracuse University professor who studies social media, said the disclosures will increase pressure to regulate Facebook and other social media firms, already under scrutiny for allowing disinformation from Russian-directed sources to propagate.

“Self-regulation is not working,” Grygiel said.

“I’m wondering how bad this needs to get before our regulators step in and hold these companies accountable.”

Daniel Kreiss, a professor of media and communications at the University of North Carolina, said Facebook failed to live up to its responsibilities on election ads.

“The fact that Facebook seems to make no distinction between selling sneakers and selling a presidential platform is a deep problem,” Kreiss said.

Some analysts suggested the breach posed an existential crisis for Facebook because of how it gathers and uses data on its two billion members.

David Carroll, a media professor at the New School’s Parsons School of Design, said Facebook and others will soon be forced to live with new privacy rules such as those set to take effect in the European Union.

“Facebook and Google will have to ask users a lot more permission to track them,” Carroll said. “Most people are going to say no, so I think it’s going to have a huge impact on these companies.”

Carroll has filed a legal action in Britain calling on Cambridge Analytica to disclose what data was gathered and used on him.

“If I can get them to disclose my data or my personality score, it indicates every other American has the right to the same thing,” he said.

An undercover investigation of Cambridge Analytica by Britain’s Channel 4 said executives boasted they could entrap politicians in compromising situations with bribes and Ukrainian sex workers, and spread misinformation over the internet.

The executives claimed to have worked in more 200 elections across the world, including Argentina, the Czech Republic, India, Kenya and Nigeria.

The British firm said it “strongly denies” the claims from Channel 4 as well as reports on misuse of Facebook data.

“Facebook data was not used by Cambridge Analytica as part of the services it provided to the Donald Trump presidential campaign,” a statement read.  /cbb